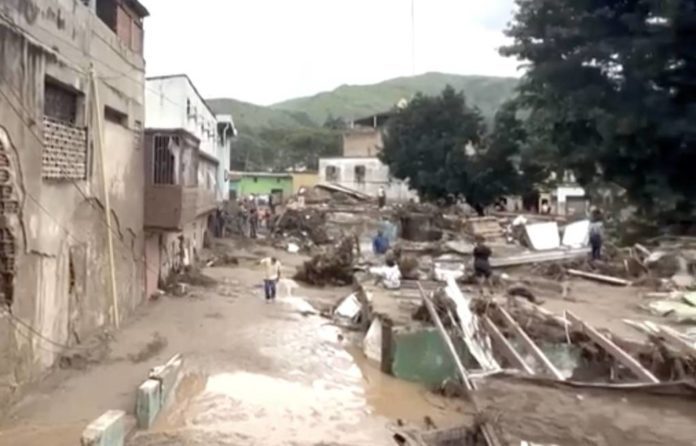 A deadly landslide swept through an agriculture-industrial community in central Venezuela on Saturday night. Mud, rocks, and debris flowed through neighborhoods, killing at least 22 people. The landslide was caused by days of torrential rain and flooding. Several people remain missing.

The cascade of debris swept down a mountainside onto Las Tejeras residents late Saturday in Santos Michelena, about 54 miles southwest of Caracas.

According to Venezuela’s Vice President, Delcy Rodríguez, the death toll climbed to 22. “There was a large landslide in the central area of Las Tejerías; we have already found 22 dead people; there are more than 52 missing,” Rodríguez added. “There are still people walled in. We are trying to rescue them, to rescue them alive.”

Shelters have been set up for those displaced by the storm.
Rescuers brought in dogs and drones to help the rescue efforts in the search.

Unfortunately, the rain hasn’t stopped. It was reported that rain began to fall again in the region on Sunday evening. Sparking fears in those in the region.

Many people have been impacted in the area. Red Cross officials in Aragua state estimate that 20,000 homes have been affected in the surrounding Santos Michelena municipality.

The areas hit hard will need a lot of manpower to help them through this natural disaster. Maduro announced that 20,000 officials had been deployed to affected areas, including rescue workers and security forces members.

Venezuela has been hit hard with rain and flooding. Floods have affected 11 of Venezuela’s 23 states over the past week due to torrential rains.

For more coverage, see the additional news sources below: