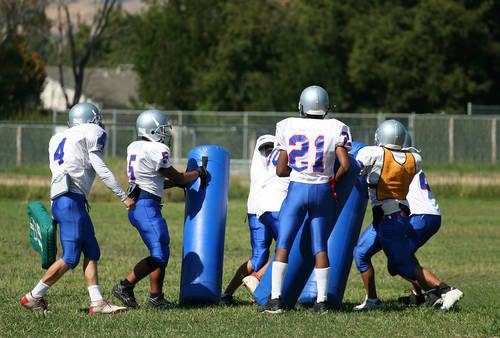 A senseless shooting sent shockwaves through Philadelphia late Tuesday afternoon when a gunman opened fire on five teens, killing a 14-year-old boy and injuring four others. It happened after a football practice outside Roxborough High School.

According to reports, a light green ford explorer drove up to where the football players just finished a football scrimmage.  Gunmen from the exploreer fired multiple shots before leaving the scene.  A 14-year-old boy was hit and collapsed as he was making his way to the locker room. He was then rushed to Einstein Medical Center, where he later died. The Philadelphia School District explained that he was part of the Roxborough’s football team but attended nearby Saul High School, an agriculture-focused micro-school.

Police shared that three of the other four boys were rushed to Einstein and Temple Hospital after receiving gunshot wounds and were in stable condition as of Tuesday night. The fifth teen was grazed by a bullet and did not require medical treatment.

Lt. Governor John Fetterman said, “My heart hurts for Philadelphia. No parent, no family, no school, and no city should ever have to go through what the Roxborough High School community is going through right now.” “We need to ensure the police have the resources to do their job well.”

The Philadelphia Eagles took to social media to express their feelings. A.J. Brown, Eagles wide receiver tweeted, “This breaks my heart. My heart goes out to the kids involved and to the one that lost his life. We have to do better. We have to protect our children man.”

The Eagles offensive tackle Lane Johnson tweeted, “It must stop! Praying for these kids, their families, & their teammates. Sports are supposed to be a safe haven.”

Police will continue to investigate. The shooters are still at large.

It must stop! 🙏 for these kids, their families, & their teammates. Sports are supposed to be a safe haven https://t.co/GdpzYbutOp

This breaks my heart. My heart goes out to the kids involved and to the one that lost his life. We have to do better. We have to protect our children man 💔💔💔💔💔💔 https://t.co/hJi5rxQhrp