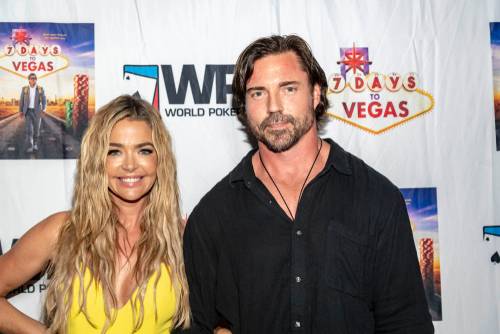 A road rage incident Monday resulted in a shot being fired at Denise Richards’ vehicle.

Richards and her husband Aaron were traveling in a pickup truck on Monday 14 November, according to her representatives.

An irritated motorist opened fire on the couple’s vehicle while passing the couple on the street while they looked for street parking.

According to US media reports, Richards arrived on set in tears after the incident, although no one was injured.

According to TMZ, the police were called after someone at the studio noticed gunshot damage to the Ford Shelby F-150.

We do not know if anyone attended the scene to take a report.

Los Angeles Police Department, which has jurisdiction in the area of the studio, said it had no record of such a report and no investigation was underway, according to NBC News.

“We don’t even know where it happened at this point,” said officer Melissa Podany.

Earlier this year, Richards discussed her OnlyFans account and how her daughter, Sami Sheen, her daughter with Charlie Sheen, is “incredibly supportive.”

According to People, the 51-year-old actor launched her OnlyFans page after her 18-year-old daughter created one. According to Richards, she wasn’t familiar with how the site “worked” at first, but after she learned that it was safe, she became more comfortable.

“I think that the platform really allows creators to be able to communicate with fans in a more dynamic way and to be our true, authentic self. It’s a very safe platform, it’s 18 and over,” said the Real Housewives of Beverly Hills star. “You can do what you feel you want to do. It has allowed me to be able to be more interactive with fans.”

“It reminds me of when you join a fan site, whoever it was that you are a fan of,” she said. “That’s how I feel that this site is.”