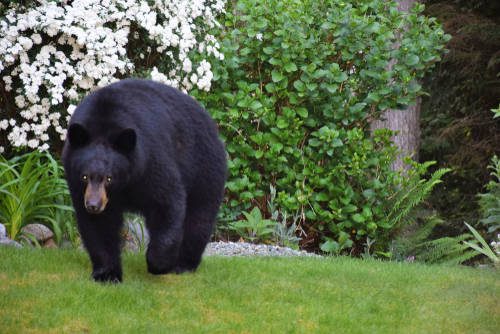 Boy, 10, hospitalized after a black bear attacked him in his grandpa’s yard Today

According to authorities, on Sunday at approximately 11 am in Morris, CT, a 250-pound black bear mauled the 10-year-old boy playing in his grandparents’ backyard in Connecticut and tried to drag him away.

In a statement, the state Department of Energy and Environmental Protection shared that the boy was transported to a hospital to treat his non-life-threatening injuries.

In an interview with the Republican-American of Waterbury, the boy’s grandfather described the terrifying attack. The bear arose from dense woods behind the house while his grandson played near the trampoline.

“I heard him yell ‘bear,’ and when I looked up, I saw his leg in the bear’s mouth and the bear trying to drag him across the lawn,” Butler recalled.

Butler moved his wheelchair toward the bear and threw a metal bar at its head; he told the station.

In the grandfather’s account, the bear released the boy and grabbed him again, using its claws to roll the boy onto his back.

Butler said a neighbor heard the boy’s screams; he came over and yelled and brandished a pipe to scare the bear away.

The bear returned to the house after Butler and his grandson were inside. It walked up the wheelchair ramp and peered into the house.

“We thought he was coming through the screen,” Butler explained. “No doubt he was a big threat.”

As a result of the bear attack, Butler said the boy suffered a puncture wound to one thigh, bite marks on one foot and ankle, and claw marks on his back.

A Connecticut environmental department report states that black bears were almost exterminated or removed by the mid-1800s. Nevertheless, they have made a comeback. Approximately 1,000 to 1,200 bears live in the state.

The bear has since been euthanized according to officials.

Boy, 10, hospitalized after a black bear attacked him in his grandpa’s yard Today