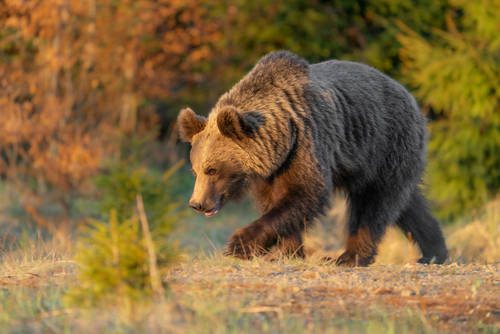 According to Fox News, A brutal bear attack on Saturday,  left two Northwest College wrestlers “blood-soaked” after they were attacked while hiking with teammates.

According to KSL, it was getting late, so Lowry and Cummings split off to search for sheds for a few minutes before heading back to the vehicle.

It was after the group split up that Cummings and Lowry came face to face with a grizzly bear.

Lowry told Fox News they hiked to higher ground after the group split up. As they hiked they noticed feces from a bear.

Lowry told KSL, “I saw bear crap all over, and I looked at Kenny (Cummings) and said, ‘There is a grizzly bear here.'”

“And right after I said that the bear came out of the willows. It was thick. It came at me and charged me and tackled me off this cliff into this gulley and was going at me for a little bit.” Lowry added.

Lowry shared with Fox News, “It was beating me up pretty good.”

Besides being bitten in the right thigh, he suffered a broken arm that had to be rebuilt with six screws and bolts. He eventually curled up in a ball as the Grizzly still attacked. As Cummings watched in horror, he jumped into action.

Cummings tried getting the bear’s attention so that he would leave his friend alone. According to KSL, the bear eventually chased him and pounced on him after Cummings kicked and pulled its hair.

Cummings told the station, “It tackled me, chewed me up a bit, and then when it was done, it wandered off, and I started calling out for Brady to make sure he was alright.”

But the bear wasn’t done. The bear came back for more.

“The bear circled back around, and it got me again, chewed on me, and that’s when it got my head and cheek. And then it went away again for whatever reason,” Cummings shared.

Harrison told Fox News after seeing Cummings, “He was just drenched in blood coming down the hill everywhere. Me and Orrin took turns carrying him down to the bottom where the field was.”

The group made their way down the trail and then flagged down first responders. Cummings was airlifted to a hospital, and Lowry was taken via ambulance. Lowry was released on Monday, and Cummings is could be released in the coming days.

As they recover from their injuries, Cummings and Lowry will be sidelined from wrestling, Northwest’s wrestling coach said to Fox News.

According to Lowry, they all had bear spray, but because things happened so fast, they couldn’t use it.

Lowery said, “It happened so fast; there was no self-defense that could have been done in that situation.”

Lowry told KSL, “When I was under that bear, I covered my head and curled up in a ball, and if it wanted to kill me, it could have killed me. There was someone looking out for me and Kendell.”

Wyoming Department of Fish and Wildlife officials said bear sightings are not uncommon in the area where the attack took place.

Dan Smith, the wildlife supervisor for Cody Region, said. “In the vicinity where the attack occurred, reports from landowners and hunters indicate there may be six to 10 different bears moving between agricultural fields and low elevation slopes.”

Coming up at 5 on @KSL5TV: A wrestler from Utah attacked by a grizzly bear in Wyoming, he and his teammate who was also attacked spoke exclusively with me from their hospital in Montana. The young men say they’re alive today because of their teammates. #ksltv pic.twitter.com/CDGLgIbs9h