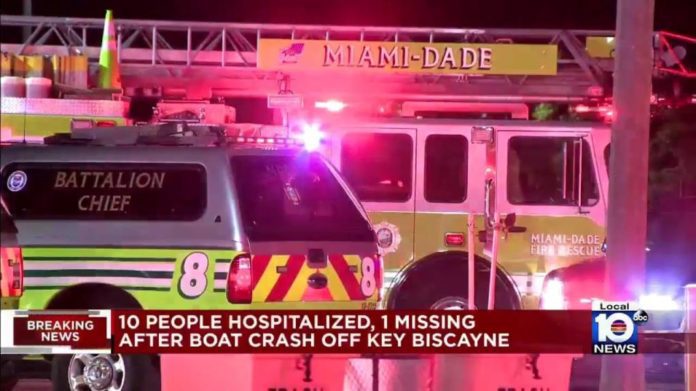 Two boats collided off the coast of Key Biscayne on Friday, leaving 10 others injured. A survivor notified the Coast Guard Sector Miami watchstanders.

Several people were injured when two boats collided off Key Biscayne. Two bodies were recovered and the cause of the crash remains under investigation.

A 30 foot boat was seen overturned and sinking after t-boning with the 21 foot boat it came into contact with. This caused a major collision with disastrous consequences for the people who were on board.

The coastguard was notified by a victim on one of the boats in an attempt to call for help. Officials have claimed in the timeline of events that this call came in around 10:45 pm.

One body was recovered from the water, and one man was airlifted to a hospital where he was later pronounced dead. The incident is under investigation by the Florida Fish and Wildlife Conservation Commission.

One person remains missing and nine others were transmitted to the hospital. Many have mixture of minor and serious injuries. However, there is one adult and one minor that are both currently in critical condition.

Investigators have switched from a rescue mission for the missing person to a potential recovery mission, anticipating that they will find the remains of the final victim.