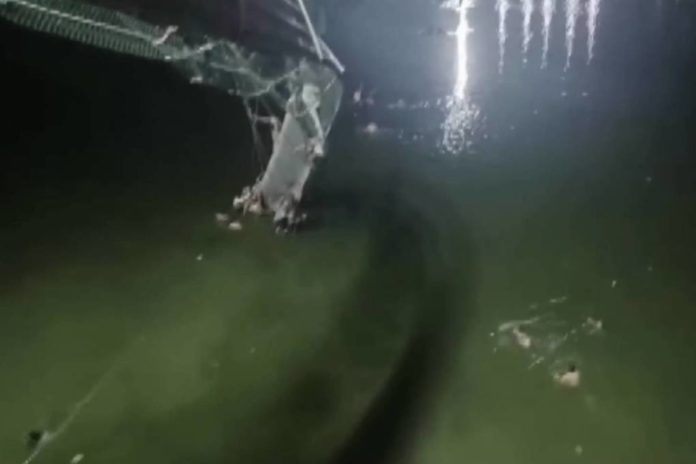 A suspension bridge collapsed on Sunday in Gujarat in western India, killing 134 people, as authorities revealed the bridge had only recently been reopened.

Several hundred people are estimated to have been on the Morbi bridge when it collapsed on Sunday evening, according to Gujarat Home Minister Harsh Sanghavi. There appears to be a break in a cable at one end, he added.

He said Gujarat filed a criminal complaint against the agency responsible for maintaining the 230-meter long bridge, which was built in the 19th century and reopened last week after renovations.

Hundreds of people gathered Monday on the banks of the river Machchhu next to the mangled metal walkway jutting into the water. Rescue workers searched the water for survivors in inflatable dinghies.

As hundreds of state and national disaster relief teams, as well as members of the Indian military, are in the process of searching and rescuing survivors, a five-member special investigation committee has been formed to investigate the incident, Sanghavi said.

In a news conference on Monday, Sanghavi did not say how many people are missing, but social media video showed dozens in the water following the collapse.

People were seen holding cables and bridge remains as emergency teams attempted to reach them, according to Reuters. As some climbed up the wrecked structure to reach the river banks, others swam to safety.

Senior police official Ashok Yadav said seven of the injured are still in hospitals, while 56 have been discharged.

Indian Prime Minister Narendra Modi announced that the families of the victims would be compensated by the Prime Minister’s National Relief Fund.

Speaking Monday at a campaign event ahead of a state-level election in Gujarat, Modi said his “heart is filled with love and is with the families of those suffering.”

“The state government has set up a committee to investigate the incident. I assure the people of the country that there will be nothing lacking in the relief and rescue efforts,” Modi said.

He announced he would be going to Morbi and that the state government will provide around $5,000 in compensation per family and about $600 per injured individual.

“I express my condolences to the families of the citizens who lost their lives in the tragedy,” he tweeted.