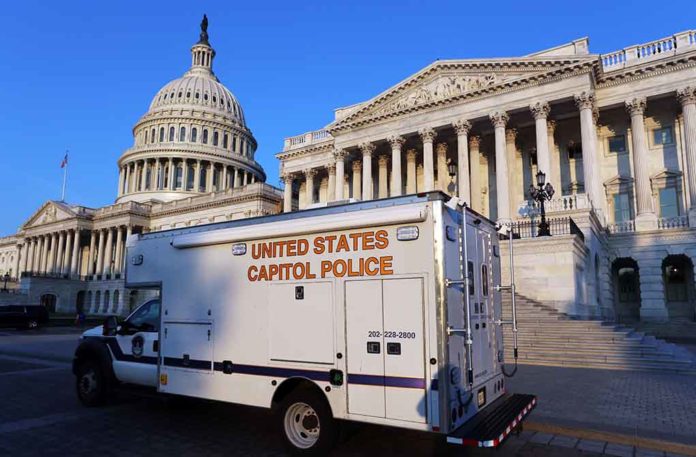 (TheDailyHorn.com) – Police officers are never above the law. Even when it is the law enforcement officers in charge of maintaining order at the nation’s capital. Some questionable actions by the US Capitol Police (USCP) have them under a microscope and facing accusations of illegal activity.

The Inspector General (IG) of the USCP began an investigation into Capitol Police after accusations emerged that they have been spying on Republican members of Congress. The alleged surveillance included surveilling people associated with the lawmakers and within their private offices.

On January 24, Politico published a report about claims that multiple Republican Congress members had been subjected to surveillance by the USCP since the events of January 6. Actions included monitoring visitors, accessing social media accounts, looking at tax and property records, and searching for foreign connections.

Representative Troy Nehls (R-TX) has accused USCP of photographing his office without his knowledge. He said officers took pictures of documents and a whiteboard containing confidential information. He asserts the sweep of his space violated his civil rights and rights as a member of Congress.

USCP Chief J. Thomas Manger said he’s open to the review because he knows his officers have done nothing wrong. He explained a review of the programs and security assignments would assure everyone nothing untoward has occurred and all actions taken have been in accordance with the law.

The USCP maintains that gathering information is necessary for safety and Capitol security. The agency claims that having access to more information allows for better protection measures.

The biggest concern about the USCP actions is they are happening undercover. Most of the accusations they face would be nothing out of the ordinary if the officers did not do them in secret. In addition, if the tactics weren’t only towards members of one party, they may not seem so suspicious. As it stands, it makes it seem as if they are running a covert operation targeting only Republicans.

The USCP has been under intense scrutiny since the January 6th incident at the Capitol. The agency has faced accusations of overstepping in an effort to make up for its failings that day.

Hopefully, the IG inspectors can get to the bottom of this issue and determine if anything unlawful occurred.

If law enforcement can spy on elected officials and violate their Constitutional rights, what does this mean for the average citizen?