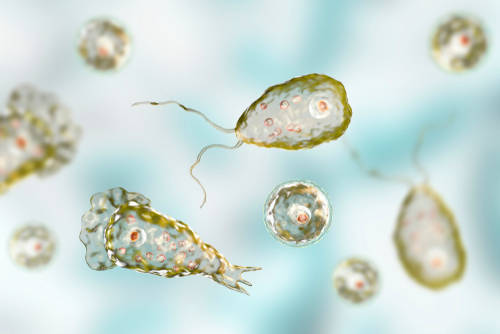 A Douglas County, Nebraska, child died of suspected infection from an amoeba, Naegleria fowleri, that might have been acquired while swimming in the Elkhorn River just west of Omaha on Sunday.

According to the CDC, Primary amebic meningoencephalitis is a rare and usually fatal brain infection.  It is triggered by the amoeba Naegleria fowleri, which enters the body when it is taken in through the nose.  Once an infection is established, it spreads up nerves to the brain, where it destroys tissue.  Patients initially experience a headache, fever, nausea, and vomiting.  But in the later stages, they can also face hallucinations and seizures.  About 97 percent of people infected with the amoeba die from the disease.

Naegleria fowleri is found in many freshwater sources and has been identified further north as formerly colder regions have grown warmer and drier. Infections generally happen late in summer, in warmer waters with slower flows, especially in July, August, and September.    According to the Nebraska Department of Health and Human Services, this child’s death is the first death from the Naegleria Fowler in Nebraska history.

The Nebraska state epidemiologist mentioned that even though millions of people spend time in freshwater sources each year, less than eight infections are identified in the United States yearly.  Douglas County public health officials, encourage residents to use caution when exposed to freshwater sources. They recommend keeping your head out of the water, using nose clips, and covering your nose while underwater.

Douglas County health officials say symptoms of an infection can develop one to 12 days after the infection, including headaches, fever, nausea, or vomiting.

Last month, A Missouri man died from a brain-eating amoeba infection after being admitted to an intensive-care unit. He had been swimming at Three Fires Lake in southwestern Iowa, which was closed to swimmers, while tested for the microorganism.

The Missouri Health Department reported a patient died from primary amebic meningoencephalitis (PAM) eight days after being admitted to a hospital. No more details were released because of concerns about disclosing the patient’s identity.