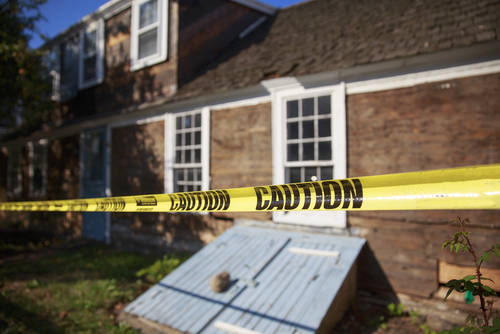 22-year-old James Rayl was shot dead by a bullet after breaking down his ex-girlfriend’s front door in the 2900 block of North Kuther Road in Sydney, Ohio, on July 31.

A grand jury voted 8-1 not to charge the homeowner, Mitchell Duckro, in the fatal Shelby County shooting caught on a doorbell camera.  The jury cited Ohio’s “Stand Your Ground” and “Castle Doctrine” laws, establishing homeowners the legal right to defend themselves and family from an intruder or threat.

According to a joint statement from Tim Sell, Shelby County Prosecutor, and Jim Frye, Shelby County Sheriff,  “The front door was a solid wooden door with a deadbolt. The deadbolt was found to be in the locked position and the casing to the lock side of the door was broken. Three holes were found in the decorative glass window in the door.”

The video depicts the events that unfolded.  Rayl rang the doorbell several times.  He briefly left and then returned.  Rayl was told to leave and warned that the owner was armed with a gun.  He ignored the warnings and began to beat down the door and make his way in.  Three gunshots were fired.  Rayl walked back toward the garage and fell to the ground, where he ended up passing away.

According to reports, the homeowner’s daughter Allyson Duckro had ended her relationship with Rayl over 18 months earlier.  Rayl left a message on her phone the night before and then showed up at her house.

Fox News reported that the 911 call recording detailed Allyson Duckro telling her father, “Dad, there’s nothing you could have done; you saved my life.”