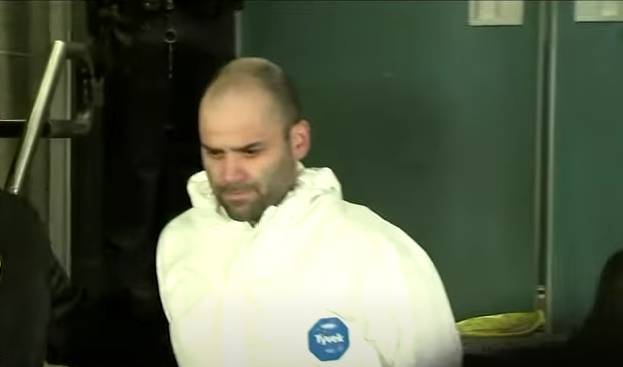 As the couple’s three young children sat in the backseat of the vehicle, a New York dad is facing numerous criminal charges after allegedly intentionally running over his wife with an SUV.

On Tuesday, Stephen Giraldo, 36, an MTA bus driver, was arrested on charges of attempted murder in the second degree, assault in the first and second degrees, reckless endangerment in the second degree, endangering the welfare of a child, and criminal possession of a weapon for critically injuring his wife Sophia Giraldo, authorities announced on Wednesday.

The father in New York is facing numerous criminal charges after he allegedly admitted to intentionally running over his 41-year-old wife with an SUV while all three of their young children were in the backseat, then stabbed her with a knife after getting out of the vehicle.

“The brutality of the attack, and the fact that it was committed in full view of the victim’s three young children, stirs heartbreak and outrage in all of us,” District Attorney Katz told reporters after Giraldo was arrested. “My thoughts are with the children.”

Police obtained surveillance footage showing Giraldo behind the wheel of a white Ford Explorer near the intersection of Parsons Boulevard and Sanford Avenue in Queens at approximately 5:20 a.m. December 27. The children of Stephen and Sophia, ages six, nine, and eleven, are seen inside the Ford Explorer when Sophia appears to walk in front of it.

The prosecution said Giraldo remained at the scene of the horrific attack until first responders arrived and arrested him.

She was transported to Queens’ New York Presbyterian Hospital for medical treatment. Among her injuries were “severe neurological damage, broken bones in her leg, and a stab wound that punctured her liver.”

A court appearance is scheduled for Giraldo for Jan. 12. He faces a maximum sentence of 25 years in prison if convicted.

The white SUV is seen in footage obtained by Los Angeles ABC affiliate KABC-TV parked outside Sophia’s house. Upon seeing someone approaching the vehicle, the SUV accelerates into the person so quickly that it tips over.

At Giraldo’s arraignment in Queens Criminal Court on Tuesday, prosecutors claimed that he stabbed his wife before calling 911.

“I think I killed my wife,” prosecutors claim he told the emergency dispatcher.

According to police body cam footage, Giraldo also told an officer at the scene, “I hit my wife, arrest me.”

According to prosecutors, Sophia – who is currently in a vegetative state – was in critical condition and may not survive.

Earlier this year, Sophia filed for divorce from Giraldo, according to court records. She hosts “The Unfiltered and Free Podcast.” According to the podcast’s description, it features “real conversations about living life after betrayal and abuse.” Sophia describes herself in the first episode of the podcast as being “in the middle of [a] marriage filled with betrayal and abuse.”

“I’ve just been thinking about my expectation and how as a result of trauma I tend to expect the negative,” Sophia says in her most recent episode. “I tend to expect the worst thing to happen, the worst-case scenario. You know, all those things. And I want my new year to look different.”

According to the Daily News, she and her children lived in a domestic violence shelter in 2019 and had lived alone for approximately a year and a half before moving into the shelter.

Giraldo and she were reportedly married in 2009.