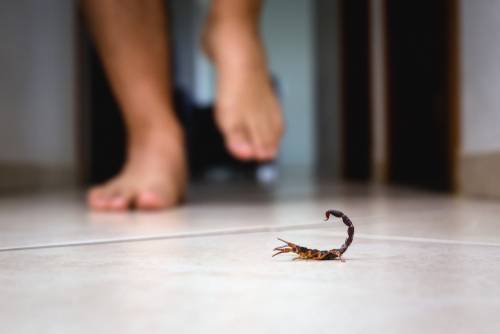 While putting on his shoes, a seven-year-old Brazilian boy was stung by a scorpion that is considered one of the most deadly in the world, causing seven heart attacks, and killing him.

After being stung by a Brazilian yellow scorpion with highly toxic venom, seven-year-old Miguel Furtado Barbosa died on October 25 in a hospital.

His family was reportedly preparing for a camping trip on Sunday, October 23, in Anhembi city, Sao Paulo state. The boy quickly felt a sting on his foot while putting on a shoe.

According to local news, The NY Post reported that his mother, Angelita Proenc Furtado, said, “As soon as he put (the shoe) on, he screamed in pain.” She explained, “As we didn’t find what had stung him, we kept looking. But his leg started to turn red, and he said the pain was increasing.” She added, “that’s when I imagined that it really was a scorpion and that I needed to find it to find out which one it was.”

According to multiple news outlets, the terrified family searched the house and finally found the offender, a Brazilian yellow scorpion, or Tityus Serrulatus.

Angelita and her husband rushed the boy to a local hospital where scorpion antivenom was available.

During his stay at the hospital, Miguel suffered four cardiac arrests, according to his mother. Despite the doctors’ best efforts, the damage was irreversible.

During an interview, Furtado recalled, “When I entered the room to see him after what happened, I placed my hand on his head and gave him with all my heart to his true owner. I said just like this: Lord, he’s yours! Take him with you and take care of him. May your will be done, not mine.”

After opening his eyes and speaking to her the next day, the boy appeared to be getting better. Despite that, Luiz Miguel’s agitation required another round of sedation.

“They even removed him from some medication. He opened his eyes and tried to talk to me. I kissed him, and he had to be sedated again because he was very agitated,” Furtado shared, as reported by The Independant.

After experiencing three more cardiac arrests on Tuesday, the boy began to decline and passed away shortly after.

A community official in Anhembi extended his sympathy and support to the grieving family.

“Accidents involving scorpions are not rare because the municipality is located on the banks of the Tiete River and has a large forest area,” municipal officials said.

So far this year, the city has recorded 54 incidents involving scorpions.

The NY Post shared that Luiz’s mother, Angelita, who has another son, 5-year-old Joao Felipe, expressed her gratitude for the time she was able to have with her boy.

She said, “I decided that I would make the lesson that Miguelzinho left me worth it as he taught me how to be a mother,” she said, using his nickname.

Angelita added, “I will be for Joao what I may have stopped being for Luiz. We have to have this mindset instead of feelings of guilt. Not to go back in time and do something different, but I can be different for Joao,” she added.