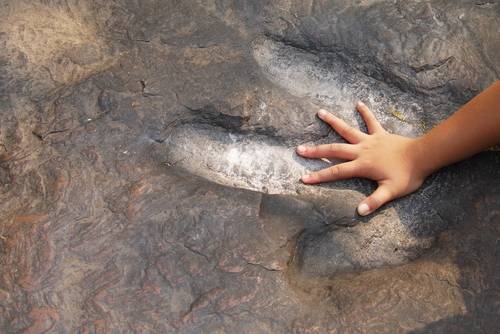 In Texas, the severely dry conditions have brought many changes to the state. Due to the excessive drought, the Paluxy River has recently dried up in the Dinosaur Valley State Park and now showcases dinosaur tracks from around 113 million years ago.

Stephanie Salinas Garcia, a park spokesman, told CNN in an email, “Most tracks that have recently been uncovered and discovered at different parts of the river in the park belong to Acrocanthosaurus. This was a dinosaur that would stand, as an adult, about 15 feet tall and (weigh) close to seven tons.”

Garcia continued telling CNN, “While these newer dinosaur tracks were visible for a brief amount of time, it brought about the wonder and excitement about finding new dinosaur tracks at the park,” “Dinosaur Valley State Park will continue to protect these 113-million year-old tracks not only for present, but future generations.”

According to the US Drought Monitor, more than 60% of Texas has been experiencing two of the most intense categories of drought. This kind of extreme drought can cause many issues, including: increased fire danger, widespread crop loss, devastating algae blooms, poor water quality, and water shortage, among other things.

According to park officials, they expect the tracks to be re-buried due to the expected rainfall. Although they will no longer be visible, this will help protect them from the natural elements.

In addition to the Acrocranthosaurus tracks, there are additional track sites to see at the Dinosaur Valley State Park. These include Sauropod and Theropod tracks, they have detailed information on where to find them on their website.

For more coverage on this story, please see the additional sources below: