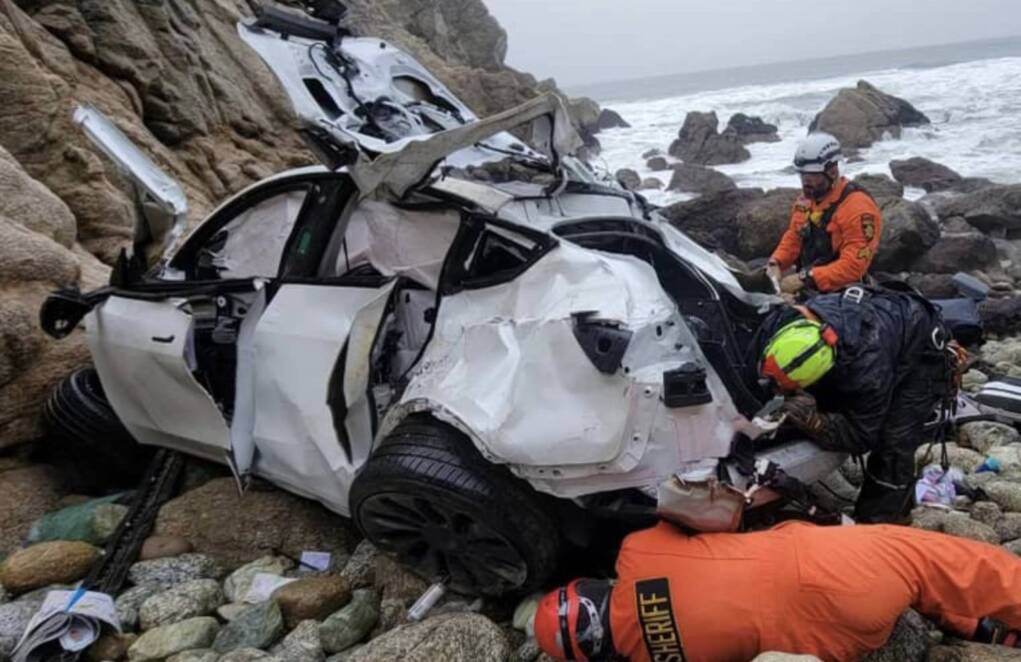 An intentional crash involving a Tesla and four passengers has led to the arrest of the driver who drove over the edge with his wife and children in the car.

The family miraculously survived the long fall off the coastal cliff area known as Devil’s Slide. Charmless Patel, 41, his wife Neha, and their kids, a 7-year-old girl, and a 4-year-old boy, all survived the crash.

“We go there all the time for cars over the cliff, and they never live. This was an absolute miracle,” said Coastside Fire Protection District/Cal Fire Battalion Chief Brian Pottenger on Monday.

The California Highway Patrol revealed a shocking charge against the father and husband, Dharmesh Patel of Pasadena. They stated that he did it on purpose, and Patel will be charged with attempted murder and child abuse after he is released from the hospital.

A statement released by the CA Highway Patrol stated “CHP investigators worked throughout the night interviewing witnesses and gathering evidence from the scene.”

The statement added, “Based on the evidence collected, investigators developed probable cause to believe this incident was an intentional act.”

According to authorities, the Tesla had plunged more than 250 feet from the highway and then crashed to the bottom of a rocky area. After flipping several times, the vehicle landed on its wheels, wedged against a cliff just feet from the water.

Pottenger said firefighters were lowered down the cliff by a rope system from the highway.

In the aftermath of the crashed vehicle, other firefighters using binoculars suddenly spotted movement – transforming a seemingly routine body recovery into a frantic rescue operation amid heavy rain, strong winds, and crashing waves.

Pottenger said, “Every one of us was shocked when we saw movement out of the front windshield.”

Due to jammed doors on the car, firefighters were forced to use “jaws of life” tools to free the victims.

The children were rescued out of the back window and then were brought up the cliff in a rescue basket by hand.

A medical ambulance rushed them to the hospital while the parents had to be hoisted by a helicopter to the hospital, according to the battalion chief.

Patel is reported to be a radiologist at the Providence Holy Cross Medical Center in Los Angeles. The hospital released a statement saying:

“Providence Holy Cross Medical Center is deeply saddened to learn of a traffic incident involving one of our physicians and his family. We are extremely grateful there were no serious injuries.”

This morning, a vehicle with 2 adults and 2 minors went over cliff at Devil's Slide in @sanmateoco. Witnesses saw the accident and called 911. The car plunged hundreds of feet down the cliff and landed on the beach. All four patients were successfully rescued. Watch the video! pic.twitter.com/HUM2SJ56Oy