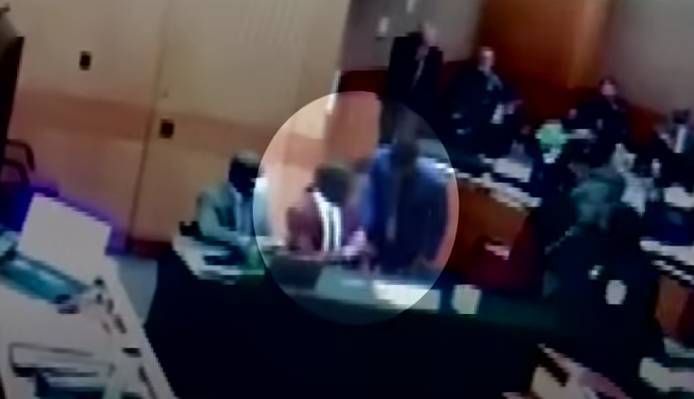 The rapper Young Thug is facing compounding legal issues amidst a slow start to his trial on racketeering (RICO) charges in Georgia.

According to prosecutors, Thug and a co-defendant, Kahlieff Adams, engaged in a hand-to-hand drug deal that was caught on court surveillance footage – resulting in the third time jury selection was suspended in the wide-ranging conspiracy trial against the alleged Atlanta-area gang known as “Young Slime Life,” or YSL.

“Defendant Adams, who is currently serving a life-without-parole sentence for murder, conducted a hand-to-hand drug transaction with Defendant Jeffery Lamar Williams, in open court,” according to the state’s motion charging Khalieff Adams with numerous new offenses.

The court took the opportunity to remind everyone of the rules despite Thug not being charged with contraband allegations.

“The reason for the delay is we’ve had yet another instance of alleged contraband being introduced to our space,” A new motion filed by prosecutors late Wednesday evening was received by Judge Ural Glanville. “As a result of that, and a subsequent investigation, one of our inmates, unfortunately, had to go to Grady Hospital.”

As a result of the incident, Khalieff Adams was taken to a hospital for ingesting contraband in an effort to conceal it.

“I would just invite counsel to talk with their clients,” said the judge, who was exasperated. “This is the third time that we’ve had contraband introduced in this space…the court’s concern is this may pose issues to [the defendants] remaining and being present in this space.”

Suri Chadha Jimenez, an attorney for third co-defendant Cordarius Dorsey, accused prosecutors of trying to gin up media coverage with the motion – and said deputies should be investigated for using excessive force to subdue Adams.

“Mr. Adams was also transported because he needed medical assistance after being tased several times by officers,” wrote Jimenez in a motion obtained by the Atlanta Journal-Constitution.

Following his arrest, he was charged with one count of possession of a schedule II controlled substance, willful obstruction of law enforcement officers, possession of marijuana less than one ounce, and possession of an alcoholic beverage by an inmate.

Low-resolution footage obtained by Atlanta ABC affiliate WSB-TV and NBC affiliate WXIA shows a person identified as Khalieff Adams walking up to Thug and handing him something.

“Deputies quickly apprehended the detainee and took possession of the contraband, and completed a search to ensure no more contraband was present,” according to a statement from the Fulton County Sheriff’s Office.

Khalieff Adams was also found with Percocet, marijuana, tobacco, and other contraband wrapped in plastic – as well as food seasonings.

Thug’s attorney maintains that his client did nothing wrong.

“His side is the truth,” according to Thug’s attorney Keith Adams. “The reality is Mr. Williams had nothing to do with what went on in the courtroom on yesterday. One of the co-defendants on his way to the restroom attempted to pass something to Mr. Williams, who immediately turned it over to the deputy.”

Adams also criticized prosecutors for going too far – even though Thug has not been charged with any offense related to contraband.

“The state’s motion is replete with factual inaccuracies, embellishments and attempts to make Mr. Williams responsible for someone else’s actions,” he told the Journal-Constitution. “The end result of an investigation into (Wednesday’s) incident was that Mr. Williams was not engaged in any wrongdoing.”

Thug may still be charged with the contraband allegations, but prosecutors have said that a decision will be reached only after a thorough investigation into the incident is complete, WSB-TV reported.

Teombre Calland, Khalieff Adams’ attorney, urged restraint and accused the state of wrongdoing in a statement to the TV station.

“On behalf of Mr. Adams, these allegations are simply that: mere statements made by the state in an effort to thwart the lengthiness of the jury selection process,” stated the attorney. “Mr. Adams adamantly maintains his innocence and looks forward to the conclusion of this trial.”

Khalieff Adams and Thug have pleaded not guilty to the allegations of RICO.

It has been alleged that Thug is the leader of the so-called YSL gang, and he is being charged with eight violations of the Peach State’s RICO statute. It is expected that the trial will take at least half a year, if not substantially longer, because of the large number of defendants, each of whom has their own attorney and legal interests.

He won a Grammy in 2019 for his background vocals and outro on Children’s Gambino and Ludwig Göransson’s socio-political anthem, “This is America.”