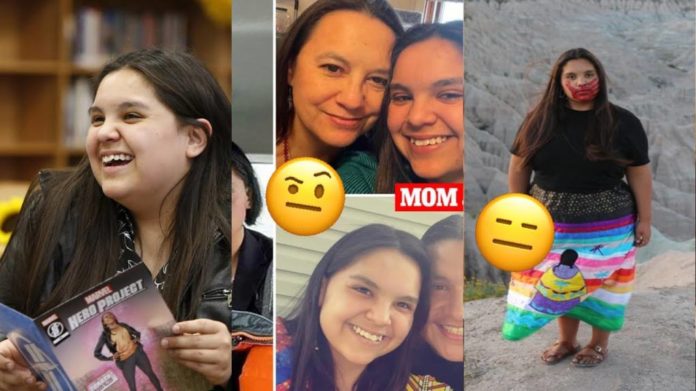 Jumping Eagle, 50, believes Ezra Miller, 29, brainwashed, assaulted and possibly drugged her daughter, Tokata Iron Eyes, before traveling with her and several other young women in California.

Jumping Eagle and her husband say Miller’s toxic behavior includes the appropriation of Native beliefs. Miller even lectured them on what kind of Lakota medicine man their family should use.

The actor was arrested in Hawaii in March for disorderly conduct and pled no contest. They were also caught on video apparently choking a woman in Iceland.

Jumping Eagle and her husband flew to Los Angeles in late May to rescue Tokata from what they described as Miller’s “cult-like” grip. Tokata posted a video on Instagram defending herself against accusations.

Tokata dropped out of school in December to live with Miller in Vermont and go on road trips with them. Her parents failed to persuade her to leave Miller in LA, but Jumping Eagle filed a police report about Miller’s assault of her.

The parents allege that Miller has used violence, intimidation, threat of violence, fear, paranoia, delusions and drugs to control their daughter.

Miller participated in the protest against the North Dakota Access Pipeline in 2016, where Tokata was already protesting alongside her parents at just 12 years old. Jumping Eagle claims that Miller and his daughter first formed a friendship upon meeting at the protest.

Tokata proved to be an influential activist over the years, and she was interviewed by Angelina Jolie for her 2021 book. Miller took Tokata out to London with him in 2017, but a family friend told Jumping Eagle that Ezra tried to sleep with Tokata.

Back then, Jumping Eagle and her husband believed that Miller was harmless and just “buddies” with their daughter.

Tokata dropped out of Simon’s Rock after an intensified involvement with Ezra Miller. A group of people led by Miller took road trips to New Orleans and California.

Miller started displaying strange behavior during these trips. They spoke about the FBI and the KKK following them, as well as being the reincarnation of Jesus Christ.

Tokata’s parents brought her back to Pine Ridge after she had a psychological breakdown at Miller’s home in Vermont. They took her to a sweat lodge and prayed Lakota prayers.

Tokata got better while at home, but eventually left for LA with Miller and his entourage. Her parents flew out again to get her.

Jumping Eagle was assaulted by Ezra Miller while trying to get Tokata out of a car.

Warner Bros. postponed the release of “The Flash” to 2023 due to Ezra Miller’s increasingly erratic behavior.

For more information on this strange story, consider the following news outlets listed below.