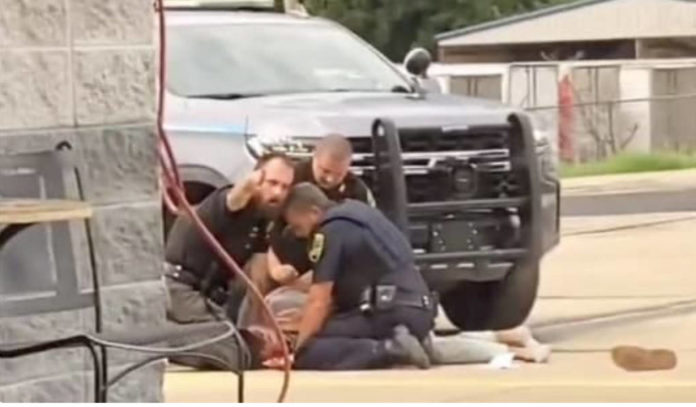 An intensely graphic video has created outrage across social media Sunday.  The video shows three police officers brutally beating a man they had detained on the ground.  The officers are seen kneeling over the man, with their hands and knees holding him down as punches to the head were thrown.  Those on social media were outraged at the excessive force used. Immediately accusations were made, and people were calling for charges and arrests against the involved officers.

According to local reports, the incident took place outside a Mulberry gas station Sunday morning. According to Fox3, the officers confronted the man after receiving a call about a guy threatening a worker at the gas station. The man pushed a deputy to the ground and then punched him in the back of the head, which led to his arrest.

The Crawford County Sheriff’s Office made a statement on Facebook, “In reference to the video circulating social media involving two Crawford County Deputies, we have requested that Arkansas State Police conduct the investigation and the Deputies have been suspended pending the outcome of the investigation. I hold all my employees accountable for their actions and will take appropriate measures in this matter.”

Alabama’s Governor Hutchinson also commented by tweeting Sunday evening, “I have spoken with Col. Bill Bryant of the Arkansas State Police, and the local arrest incident in Crawford County will be investigated pursuant to the video evidence and the request of the prosecuting attorney.”

For more information on this story, please see additional news sources below: