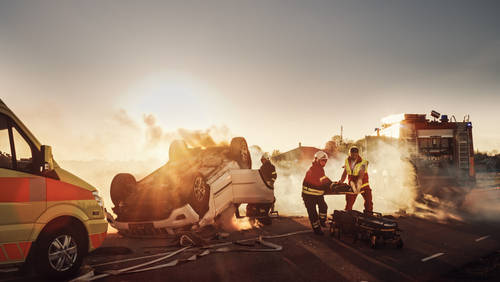 A Rolling Meadows man was left in critical condition after a head-on collision.  It happened on Interstate 90 in McHenry County, Illinois. The accident occurred Sunday at about 2:10 am. His wife, Lauren Dobosz, his four children, ages 5-13, and an additional child, all died on the scene while leaving Thomas Dobosz fighting for his life.

According to the Medical Examiner’s Office, Thomas Dobosz died Wednesday morning from the injuries he sustained from the collision.

The Dobosz family were driving their van down I-90 when a car driving in the wrong direction collided head-on into the Dobosz family van.  The driver of the car, 22-year-old Jennifer Fernandez, was also killed in the crash.

When the local first responders arrived on the accident scene, the car and the van were up in flames and on fire. Thomas Dobzsz was reported driving the van. The Illinois State Police are investigating why Fernandez was going in the wrong direction. Autopsies are expected to come shortly.

The cause of the accident is under investigation.

For more information, please consider the additional news sources below: