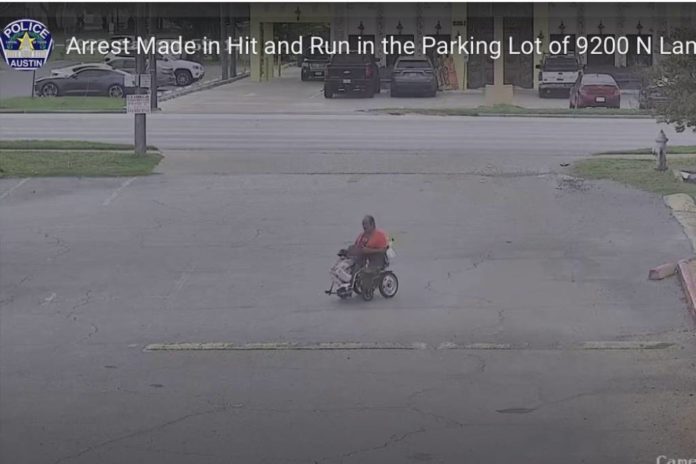 A shocking video has been released detailing a hit-and-run accident. The Austin Police Department in Austin, Texas, released the graphic surveillance video showing a teen driver crashing right into an older man while he was in his motorized wheelchair.

According to police, the accident happened on Saturday, September 3, at about 10 am. It happened in a parking lot on Lamar Blvd.

Authorities have charged and arrested Pablo Antonio Avila-Banagas. He is described as a seventeen-year-old male.

The video details the victim as he crosses the parking lot. You can see him wave to the oncoming driver Avila-Banagas as he approaches him, and the wave was not enough. Instead of slowing down, it appeared that Avila-Banagas plowed right into him. After hitting the victim with the car, the suspect continued and drove right over the man.

Police shared that the unidentified victim suffered from severe, life-threatening injuries. Police and medical emergency services were dispatched and responded to the scene, and the victim was then transported to the hospital.

According to an initial police investigation, the pedestrian had noticed a vehicle driving recklessly as he crossed the parking lot in his electric wheelchair. He signaled the driver to slow down, and the driver struck the pedestrian at that point and then fled the scene.

The Austin Police Department shared the multiple charges that have been issued concerning this crime.

“Mr. Avila-Banagas was booked into Travis County Jail on September 9, 2022. He’s charged with Failure to Stop and Render Aid (serious bodily injury), a 3rd Degree Felony, Injury to a Disabled Person, a 2nd Degree Felony, Unlawful Carry of a Weapon (firearm); a Class A Misdemeanor, and Failure to Identify in Relation to this Case; a Class B Misdemeanor.”

Police will continue to investigate the hit and run.

The following video was released by the Austin Police Department on September 12.  The video is graphic, please watch with discretion.