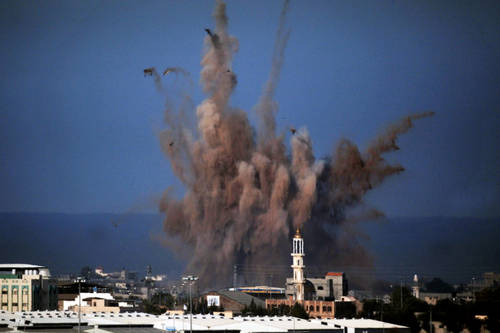 The Israeli Defense Forces launched a military campaign in Gaza on Friday against Palestinian Islamic Jihad, an American-designated terror organization. The campaign is designed to dismantle the Gaza-based wing of the Iranian-aligned PIJ, which has held a significant portion of Israel’s population hostage.

A senior Islamic Jihad commander was killed in the raid by Israel on Saturday, and the group has warned that its campaign against them may continue for another week.

At least four children were killed in an explosion near the Jabaliya refugee camp, according to Hamas, the group that governs Gaza. Palestinian militants responded to the shelling with over 400 rockets fired into Israel.

Israel and Egypt have strictly restricted movement of people and goods into and out of Gaza, and have enforced a naval blockade, over security concerns. The Gaza health ministry has called for help as electricity is cut to four hours daily.

Israeli forces arrested an Islamic in the West Bank, sealed roads around Gaza, and shelled a residential apartment block in downtown Gaza City, killing at least nine people. It was also stated that they had arrested an additional 19 members of Islamic Jihad.

The U.S. said it fully supports Israel’s right to defend itself and called on the parties to avoid further escalation.

For more information on this story, please consider the following sources: