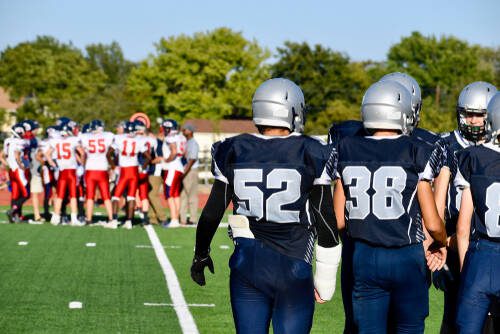 After some players were sent to the hospital following a high school football team’s workout, the head coach of the team has been suspended.

A thorough investigation into what happened at Rockwall Heath High School in Rockwell, TX, is underway, said the school’s principal.

In response to the incident, an “independent third party” has been hired to investigate.

There are allegations that during the workout, the players were required to perform an excessive amount of push-ups.

The school has not detailed the number of push-ups that the coach had the kids perform, only that they “were required to perform multiple push-ups.” but a few claims on the numbers have been made.

As reported by Fox 4, they received an email claiming that it was several hundred push-ups and that they were assigned as punishment to the players.

According to WFAA sources, the students impacted had developed rhabdomyolysis after performing more than 300 push-ups within an hour.

According to the CDC, “Rhabdomyolysis, also known as Rhabdo, is a serious medical condition that can be fatal or result in permanent disability. Rhabdo occurs when damaged muscle tissue releases its proteins and electrolytes into the blood. These substances can damage the heart and kidneys and cause permanent disability or even death.”

Fox 4 also reported that a parent of one of the hospitalized players said they performed the push-ups without taking a break or drinking water.

A full investigation into the incident is underway, and coach John Harrell has been placed on administrative leave.

According to the school’s letter to parents, the incident occurred on Friday, Jan 6, during an off-season football program.

As a result, the school had several parents report their children were experiencing health problems. According to the school, some of the cases required hospitalization.

The school gave no information about how many students visited the hospital.

A parent who requested FOX 4 not reveal their identity told FOX 4: “We send our kids to school trusting that they will be cared for at the highest level. That has been the case until this unfortunate event.”

A year ago, Coach Harrell took over as head football coach at Rockwall Heath, although he has been part of the coaching staff since 2019.

A junior captain on the team, Brady Luff, was at the workout that sent players to the hospital, according to Fox 4. He believes the coach was trying to instill discipline rather than punish the players.

Luff said, “I’m praying for all the sides that are in the hospital. They’re my brothers.”

According to Luff, water was available, and players were not forced to stay; they were free to leave.

“He’s treated us with nothing but respect, and he loves every single one of us like his own,” Luff shared.

“Student safety is a top priority for Rockwall ISD, and we will continue to take immediate and appropriate measures in the best interests of our students as we address the situation,” reads a letter from the school.