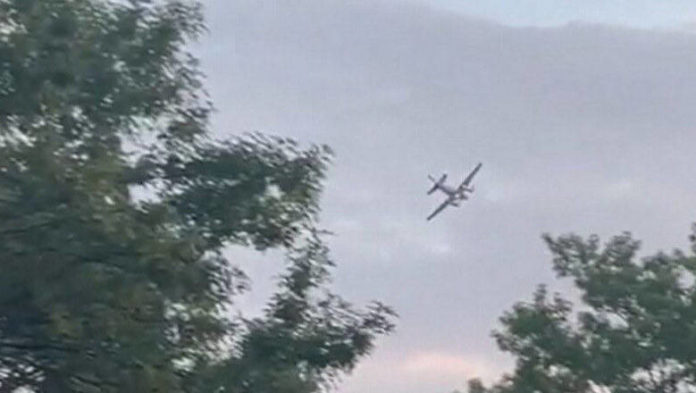 Mississippi officials were breathing a collective sigh of relief when an airport employee on the stolen jet made it safely to the ground, having circled over the town of Tupelo for five hours, flying erratically and threatening to hit a Wal-Mart. The man who stole the plane, 29-year-old Kory Wayne Patterson, was arrested after landing the plane in a soybean field. He is charged with grand larceny and making a terroristic threat, said John Kwoka, the Tupelo Police Chief, and could also face federal charges. Mississippi Gov. Tate Reeves announced via Twitter shortly after 10:30 a.m. CDT that the “situation has been resolved, and nobody has been injured.

Patterson had been an employee at Tupelo Airlift for 10 years, police said. He had some flight training, Quaka said, but did not know how to land. Quaka said that is why, just after 5 am, Patterson took off in the fully-fueled, twin-engined Beechcraft King Air C90A. Fifteen minutes later, Patterson called a Lee County 911 dispatcher and said he planned to crash the airplane at the Tupelo Wal-Mart, Quaka said.

Officers evacuated people from the Wal-Mart and nearby convenience stores. The airport tower was unstaffed until 6 am, making it a “crime of opportunity,” Kouaka said. Reeves warned residents near Tupelo, Miss., “to stay on guard”.

Officials nearly convinced Patterson to safely land the aircraft in Tupelo, though he said he did not know how to land, Quaka said during Saturday afternoons news conference. Officials even called a private pilot in for assistance. But Patterson abandoned that plan, Kouaka said, and flew north instead, ultimately taking the plane down at ground level. The aircraft landed near Ripley, Miss., about 85 miles southeast of Memphis, Tenn., and about 45 miles northwest of Tupelo.

The aircraft was damaged, but “believe it or not, the airplane was still intact,” Kwoka said. Quaka said Patterson posted a message that appeared to say goodbye at around 9:30 on his Facebook page. The message said that “he really did not ever mean any harm to anybody”.

Todd Jordan, mayor of Tupelo, said that Patterson had reached out to a family member while on a plane at some point. The mayor said he hopes Patterson will get “the care that he needs”.

Leslie Kriss, an editor at the Tupelo-based magazine, woke early to monitor the situation on television and social media. Several of her friends were out watching planes circle overhead.

I had never seen anything like it in this city, Kriss said. “It is a terrifying way to wake up Saturday morning.  Michael Kanders, director of the Center for Aviation at Farmingdale State College, New York, called the accident a “wake-up call” to the airport’s general aviation and its employees.