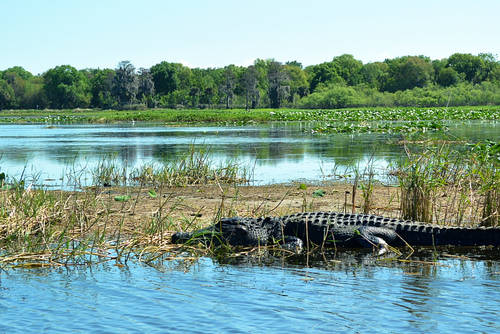 A Florida man lost an arm and found himself stranded in a swamp for three days after being attacked by an alligator.

According to reports, forty-three-year-old Eric Merda got lost in the woods after finishing an irrigation job in Parrish, Florida, on July 17. He stopped at Lake Manatee Fish Camp to throw some trash away and got lost.

After being lost in the Lake Manatee Fish Camp, Merda said he spotted his truck across the lake. He decided instead of walking around the lake back to his vehicle, he would jump in the water and swim across.

In Merda’s own words, “Not the smartest decision a Florida boy could make,” Merda told WTSP.

When Merda was about halfway swimming across the lake, Merda claimed that an alligator grabbed onto his arm and snapped it as the alligator tried pulling him under the water three times.

Merda explained, “She’s already got my arm, so when we came up the third time, she finally did her death roll and took off with my arm,” he explained.

He added, “Do you want to live or die? I was given the opportunity to make a choice, and I decided to live.”

After the alligator gave up, Merda was able to swim to shore but did not find relief right away. He ended up being lost and injured in the swamp for three days, where he wandered, trying to find his way out. On day three, he came to a fence where a man was on the other side. He was now finally able to get help.  From there, Merda was taken to Sarasota Memorial Hospital for medical treatment, where surgeons amputated the remainder of his right arm.

The man that rescued Merda told Fox 13, “I didn’t know if he was dead or alive when I first walked upon him. And there’s nothing; no words can describe it, you know. He was in a lot of pain. He was like just help, help, help. He was talking to us and everything. They cut the fence, they helped him up, and he actually walked to the ambulance.”

According to Florida Fish and Wildlife, an alligator trapper found and removed two alligators from Lake Manatee after Merda was attacked. One was six feet, and the other one was nine feet long.

Merda cautions others during a WTSP interview, “Do not feed the gators, and you guys know who you are, throwing rocks at them; I’ve seen it on the job sites, leave them gators alone.”