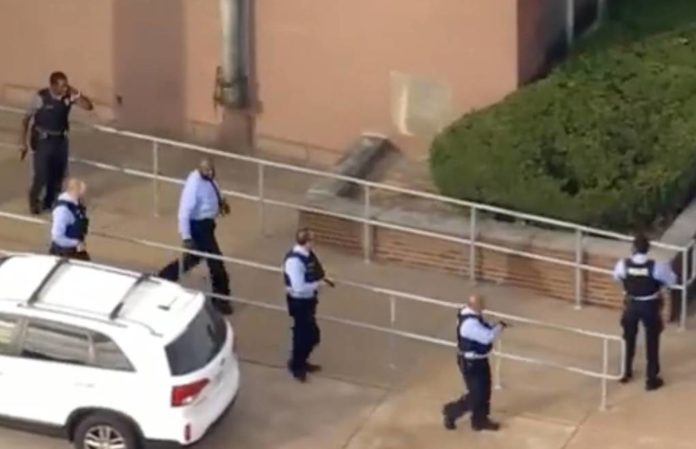 A gunman broke into a high school Monday morning in St. Louis, MO. Several rounds were shot, killing two and wounding six others.

According to Police Chief Michael Sack, gunshots and shrapnel wounds were among the injuries sustained by the six hospitalized. No information was provided about their current condition.

The school district tweeted, “Police are on-site at Central Visual and Performing Arts this morning following reports of an active shooter, and both CVPA and Collegiate are on lockdown.”

In the locked school, seven security guards were on duty, each at a separate entry point, according to St. Louis Schools Superintendent Kelvin Adams. As one guard was watching, he noticed that a man was trying to enter through a locked door, but he was unable to. Guards notified school officials and contacted the police.

“It was that timely response by that security officer, the fact that the door did cause pause for the suspect, that bought us some time,” Sack explained.

It is not clear how the gunman entered the building, but police were able to stop the shooter before more people were injured. The tweet said, “The shooter was quickly stopped by police inside CVPA.”.

A woman and a teenage girl died, with others wounded. Police exchanged gunfire with the shooter, which eventually killed him.

It was reported that students fled the scene and scaled fences and buildings, trying to find safety. SWAT was also called in.

Merius McFadden, a student, was initially convinced that the school was conducting a drill.

He told KSDK, “They pulled the fire alarm, and we have had back-to-back drills before. So, I walked out the door and walked into the hallway.

Somebody behind me said, ‘Stop!’ I said, ‘What?’, Nobody was coming out of the classroom but us. As soon as they said that, all I heard was ‘pow pow pow,'” he added. “So, I hurried up, and we ran back in the classroom and locked the door. We just stayed in the corner until we heard the police come knocking at the door.”

A ninth-grader, Nylah Jones, told the Post Dispatch that the gunman shot into the classroom from the hallway while she was in math class.

According to her, the students huddled in one corner of the classroom and tried not to move as the shooter was banging on the door.

According to the Post Dispatch, Taniya Gholston, a 16-year-old student, heard the assailant say he was ‘tired of this damn school’ after his gun jammed.

The police have not released the identity of the suspect, only that he is about 20 years old and male.