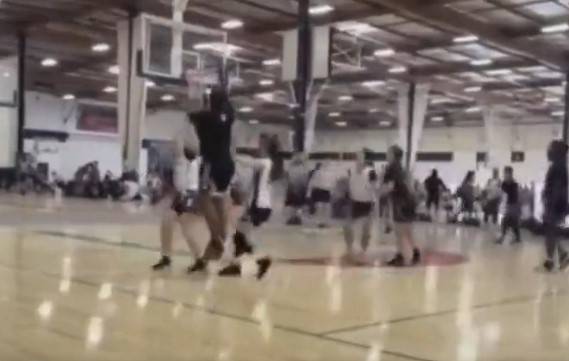 A Southern California mom who shouted at her daughter to hit an opponent in a junior high basketball game last year was ordered to pay more than $9,000 in restitution, go through anger management, and write an apology letter, according to NBC News. In a statement by the Orange County district attorney’s office, the network quoted a statement by Latira Shonty Hunt, 44, of La Puente, who was charged with a misdemeanor count of contributing to the crime of delinquency of a minor and a misdemeanor battery charge. At a Nov. 7 tournament game between SoCal Blaze and Dream Academy, Hunts daughter took a hit and fell backwards onto her victim, who fell onto the floor as well, before they both got up and went the other way. Reports said Hunt shouted at his daughter, “You better hit her”.

A mother has been charged for allegedly yelling instructions to her daughter to attack another player at a basketball game. pic.twitter.com/WuszFfWAdi

It was reported the victim suffered a concussion. In a deal reached with prosecutors, the judge of a County Superior Court granted Hunt the suspended misdemeanor charge in return for fulfilling a number of requirements over the next two years, including writing a letter of apology to the victim, his parents, and both basketball teams. In addition, Hunt was ordered to pay more than $9,000 in restitution and take anger management classes before he could participate in basketball games again, according to the network. Additionally, Hunt was ordered by the District Attorney’s Office to stay away from victims, according to NBC News. Hunt could not be reached Thursday for comment, and it was not clear if she was represented by an attorney.

A former NBA player, Cory Benjamin, is the father of a player who assaulted an unwitting young girl, according to news reports. Benjamin has apologized since the incident. Benjamin, according to The Associated Press, said that he was shocked and disappointed by his daughter’s actions because they were not representative of the values and standards that his family holds. “It also does not represent the values, character, and sportsmanship the game of basketball requires. In his words: “I apologize to the young woman that was punched by my daughter at a junior high basketball game.”

“I pray that she is fully healed, both mentally and physically. It is with great regret that I apologize to her family for what has happened to her daughter. She did not deserve it to happen to her. Also, I am sorry to everyone affected by my daughter’s actions as well as those of her mother.”