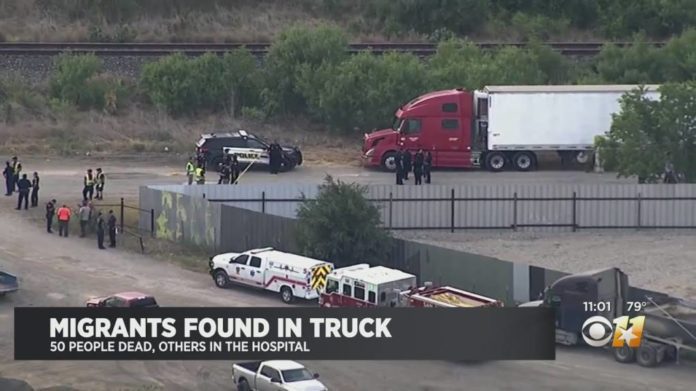 At least 50 migrants were found dead in the back of a tractor trailer in San Antonio on Monday. Sixteen others were taken to local hospitals with heat-related injuries.

San Antonio police alerted US federal authorities to an alleged human smuggling event, which has been called among the most deadly in recent years for migrants near the southern border. Three people are in police custody.

San Antonio police Chief William McManus said a worker found 16 people dead inside of a trailer with its doors partially open. The victims were a mix of men and women and varied in age, but none appeared to be minors. The people inside the truck included at least 22 Mexicans, seven Guatemalans and two Hondurans.

The Homeland Security Secretary said the deaths were “far too many” and that the firefighters that responded to the call are currently going through a critical incident stress debriefing. One of the bodies was outside the trailer when firefighters arrived.

Mexico’s consul general in San Antonio said assistance would be provided to Mexican nationals, and US officials are working to better handle the flow of migrants to the US-Mexico border.

Homeland Security Investigations is leading the investigation into the incident, which occurred near San Antonio. DHS said it is “horrified” at the loss of life and that human smugglers show no regard for human life.

Migrants have faced other tragedies and challenges enduring dangerous heat and terrain while trying to cross the US-Mexico border. More than 14,000 searches and rescues have happened since October.

For more information on this story, check out the news outlets listed below.