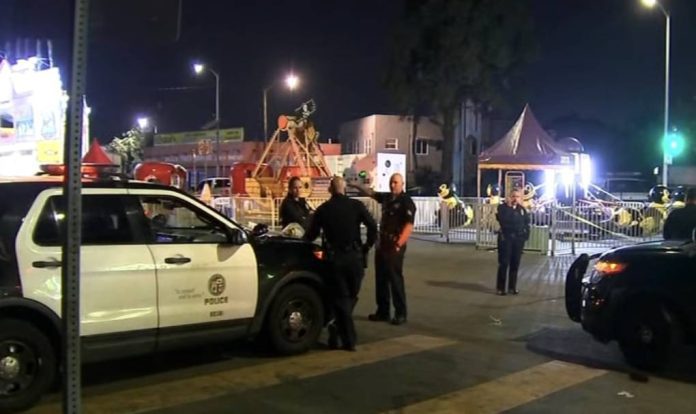 A man has been arrested in connection with Saturday evening’s incident in South Los Angeles, where he allegedly drove into a crowd of people at a street carnival.

There was a mass hit-and-run near Trinity Street and Martin Luther King Jr. Boulevard around 8:20 p.m., the LAPD reported.

Carnival goers say they heard a loud boom that sounded like gunshots while waiting in line for rides. After hearing the sound, people ran in all directions screaming.

AP reports that hundreds of people were at the carnival when the suspect drove through the crowd of about 2,000.

It is believed the suspect was driving a white Porsche Cayenne SUV with major damage when he fled the scene en route south on Martin Luther King Jr. Blvd. and Wall Street.

The chaotic scene at the carnival was caught on video by a citizen as guests fled from the event while scrambling to safety amid loud sirens.

The victims were all between the ages of 30 and 50 and they were taken to a local hospital. There were no specific details about the injuries, but authorities said they were not believed to be life-threatening.

According to Officer Lopez of KTLA, Weems was charged with hit-and-run and was being held on $50,000 bail. Police are no longer looking for any other suspects.

Sgt. Robert Leary told the Los Angeles Times,“It is a blessing that no one got severely injured.”