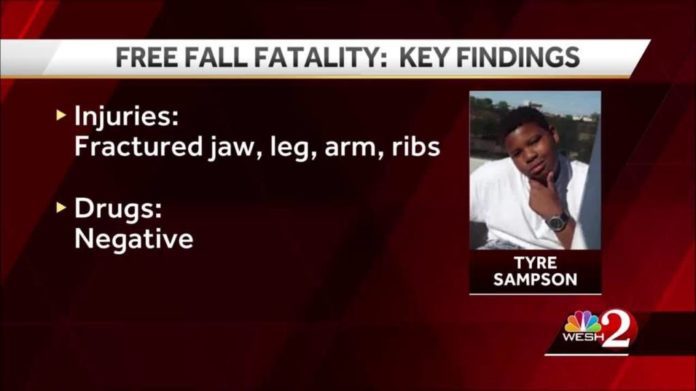 Teen who fell to his death from ride exceeded weight limit, autopsy says – The Washington Post

Tyre Sampson died after falling from the Orlando Free Fall, a ride at ICON Park that drops nearly 400 feet at speeds of more than 75 mph. The teen’s parents have filed a wrongful-death lawsuit against ICON Park and the ride’s operator and manufacturer.

Tyre’s parents are seeking a jury trial after their son died after being ejected from a ride at ICON Park.

Forensic engineering firm Quest Engineering & Failure Analysis found that Tyre slipped through a gap in his safety harness because the seat sensor had been manually adjusted.

After the autopsy results were released, the Slingshot Group called the teenager’s death “a tragic accident” and said they were working with the family and lawmakers to make lasting safety changes.

The Florida Department of Agriculture said the ride’s owner, manufacturer and landlord were negligent in failing to provide a safe amusement ride.

The lawsuit said the defendants failed to warn Sampson about the risks of going on the ride and failed to provide an appropriate restraint system.

For more information on this story, consider the following news outlets listed below to stay up to date.