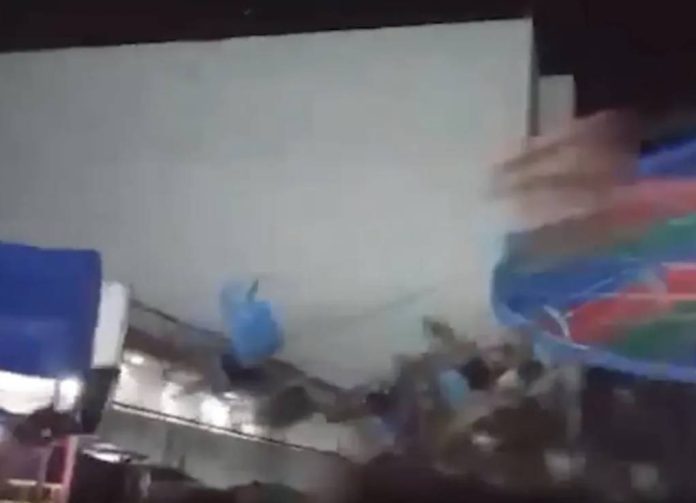 A tragic ride at an amusement park left a teen fighting for his life.

The horrific moment Mark Fajardo, 13, lost a lung after he was flung violently from a fair ride into a steel barrier.

On November 1, there was a freak accident. Viral Press reported that Fajardo and other youngsters celebrated Halloween at an amusement park in Urdaneta City, Pangasinan province, in the Philippines.

During the visit, Fajardo rode the “wave swinger,” a carousel-like attraction that swung riders around in a circle. It appears that the boy’s joy ride went awry after one of the broken locks on his seat opened, causing him to fly out of his harness.

The nail-biting footage shows the wave swinger whipping the visitors around like a whirling dervish as they shriek in delight. As Fajardo is thrown from his seat and into a set of steel grilles like a medieval catapult, their cries of joy quickly turn into screams of terror.

Quick-thinking bystanders took the unconscious teen to the hospital, fearing the worst. In spite of the fact that Fajardo survived the accident, one of his lungs had to be removed due to the impact injuries he sustained.

“Doctors told me he had to be careful since he now only has one lung left,” recalled the boy’s mother Marivic, who fears operators will fabricate stories in order to cover their tracks.

“They’re blaming my son, saying he removed the lock,” she said. “Why would he do that when the ride was going so fast?”

Since then, authorities have launched an investigation into the attraction, which has been temporarily shut down during the course of the investigation. “Our problem now is to see if anyone is monitoring or checking the rides before they are used,” Pangasinan police public information officer Major General Ria Tacderan stated.

The investigation revealed that the ride was operating legally with a permit that could be revoked if the operators are found guilty of safety violations.

It was in India, in September, that multiple people suffered injuries after a carnival ride plummeted 50 feet.