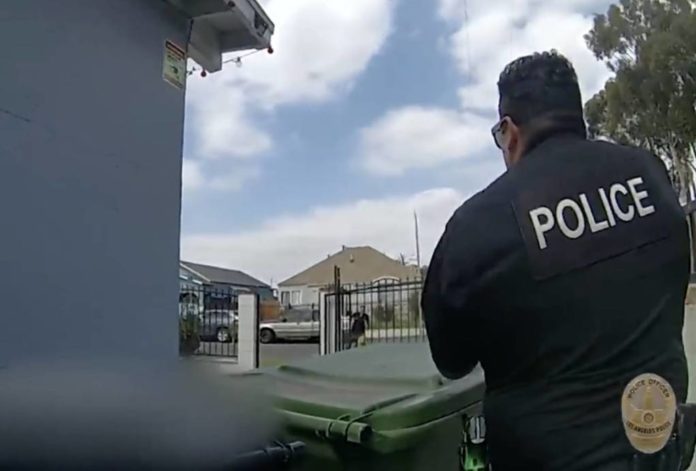 Luis Herrera, 19, was shot dead by police after calling 911 emergency services multiple times. He called 911, claiming that his father was drunk and was beating his mother and had attacked him for defending her.

Two Los Angeles police officers responded to the domestic violence call in the 400 block of West 102nd Street at around 1:20 p.m. on September 17.

They arrived at the residence and started to walk up towards the door as someone came out.  A Los Angeles Police Department press release stated that Herrera emerged from the front door wearing all black and holding “what appeared to be a black rifle.”

Police repositioned themselves behind the house and warned Herrera multiple times to put the gun down, but he did not comply. Police released body camera footage, and an officer is heard yelling at Herrera: “Hey! Hey! Hey! Put that down!”

For reasons unknown, Herrera did not respond to the officer’s request. He held onto the gun. According to the press release, “Herrera shouldered the rifle and pointed it at the officers.” In response, police shot Herrera, knocking him to the ground.

His mother can be heard “that’s my child.” The father is seen coming out after Herrera is shot, telling officers that the gun is a toy.

After being handcuffed with blood everywhere, Herrera was pronounced dead at the scene.

Upon further investigation, it was discovered that Herrera was holding an airsoft rifle. He also had an airsoft pistol that resembled a Glock pistol was also found at the scene by police.

According to police, “Investigators also determined that there was no evidence of domestic violence between the father and mother as Herrera indicated in the 911 call.”

The officer that shot Herrera has been placed on administrative leave until an investigation is complete.

Authorities will conduct a thorough investigation to determine if the actions taken were appropriate and justified.