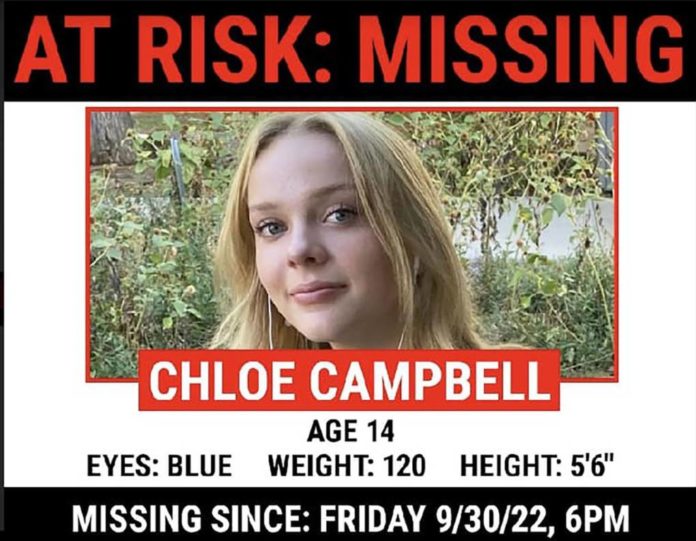 In an effort to find a missing 14-year-old girl who could be in danger, Boulder police are asking for community assistance.

Chloe Campbell disappeared on Friday, Sept. 30. The last time she was seen was at Friday night Boulder High football game.

The parents of Chloe Campbell told CBS News that she was possibly intoxicated after the nearby high school game ten days ago when she was last seen walking along Boulder Creek Trail.

Her father, David Campbell told CBS News that she was seen by others with men, he said, “She was described by eyewitnesses as being with two men. Older men. Too old to be in high school. One of whom was Asian and the other who had a beard.”

According to Boulder Police, sightings of Chloe have been reported around Boulder from friends who have been in contact with her. In spite of this, no one in her family has spoken to Chloe since Sept. 30.

Police also said that several friends believe Chloe sent them messages saying she is safe and does not want to return home. However, neither the family nor the police has been able to verify whether these messages are genuine or from Chloe.

Additionally, they became even more alarmed when an anonymous message was sent from an unknown source with a picture of Chloe.

Her father told CBS News that she appeared to be “injured and unwell” without elaborating on what exactly was shown. The parents are very worried.

The couple has also received Snapchat messages purporting to be from their daughter, but have come from an unknown handle.

There is no telling who it was; he said, “It could be anybody.”

According to David Campbell as reported by CBS News, no one has had confirmed contact with Chloe, not him, his wife or her friends.

As of now, this case does not qualify for an Amber Alert, but investigators are growing increasingly concerned about the teen’s safety as she appears to lack money and medication.

Police also added that she could be with another person. They shared that “she may be with an adult male.”

Police hope that “amplifying” Chloe’s family’s fliers around town, will help reunite her with her family. Her family just wants Chloe to know she is in no trouble.