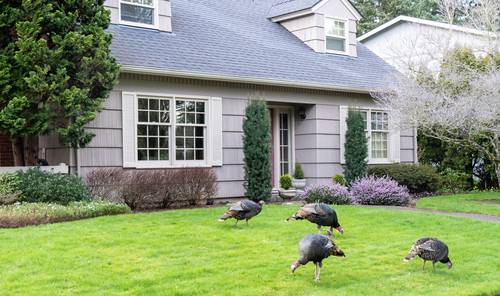 Millions of turkeys across the US might well feel threatened this time of year, but in one Massachusetts town, the birds have taken matters into their own hands, attacking residents with pecks, kicks, and loud clucking.

Residents of Woburn, north-west of Boston, have reported being trapped in their homes after being attacked and intimidated by a group of wild turkeys. Some have taken up improvised weapons in a bid to defend themselves.

It was two years ago when the turkeys first arrived, led by a male bird nicknamed Kevin. At first, the birds were docile, but over time they have become more pugnacious, leaving Woburners scared of their safety.

“They don’t let you out of your house,” explained Meaghan Tolson, who lives in Woburn.

“They peck at cars, they stop traffic. They go after kids on bikes. If you’re walking or jogging, or anything like that, they come for you.”

Over the past few years, Massachusetts has experienced a huge increase in wild turkey populations. The birds, which were reintroduced to the state in the 1970s, sleep in trees and lampposts at night, but spend the days on Tolson’s lawn.

The offenders, described by officials as “black to blackish-bronze with white wing bars, blackish-brown tail feathers and a blueish-gray to red head”, can launch attacks on pedestrians and postal workers, and even halt traffic by pecking viciously at tires in the middle of the road.

“A lot of people will leave brooms or rakes at their front door so that they can get them out if the turkeys are there.”

The birds have even trapped Tolson in her home.

“Some days it is frustrating. I’ll be like: ‘Oh my God, there’s an Amazon package’ and I can’t go get it, because the turkeys are there.

“Then I just have to wait until nightfall. I’ve kind of adjusted over time to it. I know their routine now, so I can kind of work around [them].”

Despite turkeys being native to the US, MassWildlife, which oversees the conservation of wildlife in Massachusetts, reports that they had died out by 1851 due to habitat loss.

In the 1970s, biologists attempted to reintroduce turkeys by trapping 37 birds in New York and releasing them in south-west Massachusetts. There are now between 30 and 35,000 turkeys in Massachusetts, supplemented by further transplants from out-of-state.

The expansion of the birds into towns and cities has been an unintended consequence. According to Dave Scarpitti, Mass Wildlife’s turkey and upland game project leader, turkeys eat food that’s easy to get, including seed from bird feeders.

“Unfortunately, it’s this food source that is most often the cause of human-wildlife conflict,” Scarpitti told reporters.

Massachusetts Wildlife even has a page on its website dedicated to turkey talk: “talking turkey ”.

“Don’t hesitate to scare or threaten a bold, aggressive turkey with loud noises, swatting with a broom or water sprayed from a hose,” MassWildlife advises. A “living with wild turkeys” factsheet recommends residents don’t feed them and keep bird feeders off the ground in order to avoid conflict. “Don’t be intimidated by turkeys”, it also advises.

It is Kevin, the only male in the group, who Tolson blames for the group’s behavior, noting that when Kevin is absent, female turkeys tend to leave people and cars alone.

“The women are more mellow and not so territorial. But I think he kind of amps them up to get them going to chase people. But they’re never the instigators,” said Tolson.

“When Kevin’s not around they’ll actually just mind their business and walk away from you.”

Several residents have called the police, and Tolson said officers sometimes arrive and “shush the birds away.” However, once the law leaves, the turkeys go back to terrorizing the residents. According to Tolson, the birds have also bulked up in recent months, which makes them even more intimidating.

“When [Kevin] goes after you, he can kick pretty good.”

Tolson said she wishes the birds no harm despite all the trouble.

“When I don’t see them for a couple of days, I think: ‘Oh, no, someone has run them over’,” she explained.

“I mean, yeah, they can be a pain sometimes. But, you know, they’re just turkeys.”