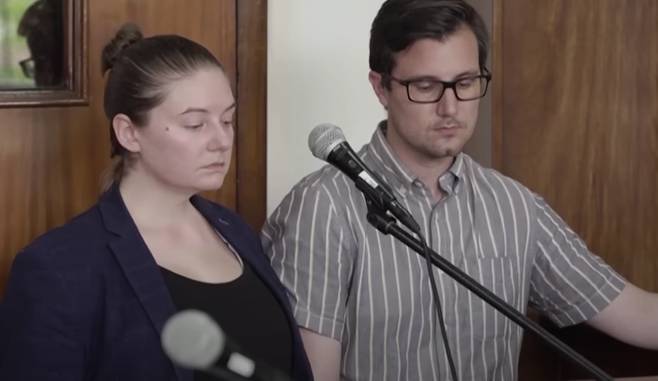 In Uganda, an American couple faces the death penalty after being charged with child trafficking and torturing a foster child from a Christian ministry.

Both Nicholas Spencer and Mackenzie Leigh Mathias Spencer, 32, have been in custody since Dec. 9 after neighbors in the capital, Kampala, reported their alleged torture.

In 2017, they moved to the East African nation to do humanitarian work and fostered three children from the Welcome Ministry in Jinja City the following year.

Police and local media report that the alleged victim, a 10-year-old boy who attends a special needs school, is HIV positive.

According to Ugandan police, the Spencers “constantly tortured” the boy from 2020, “which attracted the attention of neighbors,” who recorded some of the incidents.

He was left barefoot and “naked throughout the day,” and “would occasionally make him squat in an awkward position, with his head facing the floor and hands spread out widely,” police reported.

According to police, he was also forced to sleep on a wooden platform without a mattress or bedding and was only fed cold meals.

It was also noted that the boy “could have endured more severe acts of torture, away from the camera.”

According to the Daily Monitor, a caregiver told police that only one child was tortured because foster parents accused him of being stubborn, hyperactive, and mentally unstable.

“I wanted to leave the job, but I knew if I left without doing something about it, the torture would continue,” according to the caregiver.

The Spencers were initially charged with aggravated torture on Dec. 9, which carries a maximum sentence of life imprisonment. Their plea to that charge is not guilty.

The state prosecutor announced Wednesday that they have been charged with aggravated child trafficking, which carries the death penalty upon conviction.

The couple recruited, transported, and maintained the child through “abuse of position of vulnerability for purposes of exploitation,” the charging document states.

The new charge was read out to the Spencers during their appearance before a magistrate’s court on Tuesday. As the more serious charge can only be heard by the High Court, they were not allowed to make a plea.

A date has not yet been set for the couple’s higher court hearing. They have been remanded to Luzira Prison, a maximum-security facility on the outskirts of Kampala.

Lawyers for the couple dismissed the case as a “fishing expedition” by the authorities, claiming no evidence had been provided.

According to the lawyer, the Spencers were suffering from unspecified illnesses that could not be treated in prison, which is why they were seeking release on bail.

In her appeal, she outlined how they moved to East Africa to engage in “humanitarian work focused on women’s empowerment and education” but had to return home to Spartanburg, South Carolina, for the surgery.

“Because we live abroad, we do not have health insurance in the US which means every medical expense for this surgery must be paid out of pocket,” she wrote – receiving less than $5,000 of her requested $28,000.

Bail applications were denied due to prosecutors’ assertion that no ailments could not be treated in Uganda’s prisons.

“They have no community or family ties in Uganda, and the offense with which they are charged currently is of grave nature attracting a penalty of life imprisonment, therefore their likelihood to abscond from bail is really, really high,” stated prosecutor Joan Keko.

The US Embassy in Kampala noted reports of the arrest and detention of two US citizens and was monitoring the situation. In regards to the latest charge and potential death penalty, the embassy declined to comment on Wednesday.