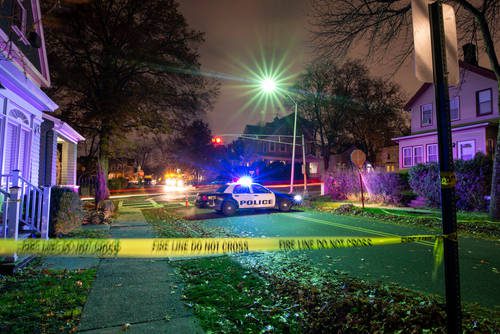 Durham police officers responding to a reported shooting found themselves in a shootout with suspects in two cars who opened fire at the crime scene. One of the officers suffered a non-life-threatening gunshot wound.

After officers blocked off the crime scene, two cars came down Main Street with their occupants firing guns. Two officers on foot at the scene fired back, and both vehicles fled.

The shooting they were called to investigate caused a car to hit a utility pole, resulting in a power outage. The victim was later taken to the hospital where he was pronounced dead.

Durham police responded to 357 reported incidents of gunfire in June, down from 373 incidents and 403 incidents by the same time in the previous two years.

Durham City Council approved spending $197,000 on a pilot program to use ShotSpotter to spot potential gunfire. Critics worry it will send police to communities of color that are already over-policed.

The man who crashed his car after being shot was killed in front of a witnesses’ house. The shooting is the second deadly one to happen in less than 24 hours in the same area, and the witness said she’s concerned for her safety with an uptick in gun violence.