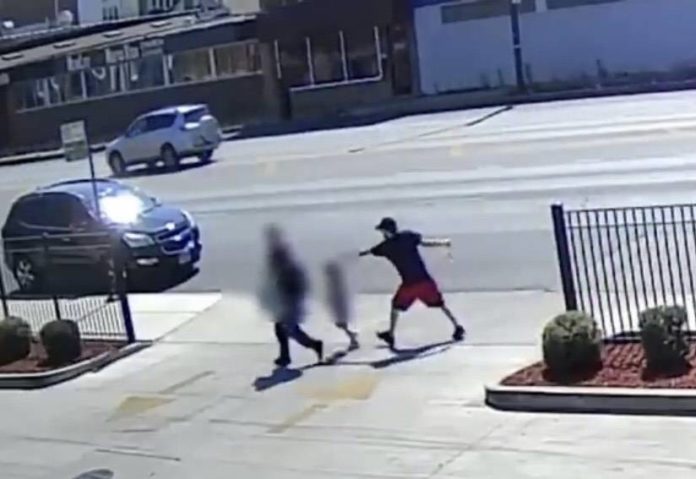 Chicago Police released video of a brazen attempted kidnapping that happened in the middle of the day in Chicago.  The Incident happened on Thursday, September 8, at around noon. They hope that the public will help identify and locate the suspect.

Chicago Police reported that a woman was walking with her five-year-old daughter along West Fullerton Avenue near North Leclaire Avenue, when they were approached by a man. During this time, the man, who has yet to be identified followed closely behind the mother and girl.

According to reports, the unidentified man first offered the mother an unnamed amount of money for her daughter.  The mother refused the cash offer, and quickly turned around and walked away from the man with her daughter close by.

The man was not satisfied, he wanted the little girl.  In the video you can see the man trying to grab the girl away from her mother.  Luckily the mother and daughter were able to escape the man’s reach and were not harmed or injured.

The Chicago Police Department described the unidentified suspect as a Hispanic male between the ages of 20-25.  He sported a thin beard, is about 5’6″, and weighs around 160 pounds.  At the time of the incident, he wore a black hat, black t-shirt, and red shorts.

Just last month another attempted kidnapping was caught on camera in Ohio.  Six-year-old Ken’Adi Nash was taking out the garbage near the street when a man tried grabbing her.  The six-year-old screamed and was able to escape.  The suspect was later arrested and charged.

Chicago police are asking the public for help, and if anyone has information about the suspect or the incident, please call the police at (312)-746-6554.