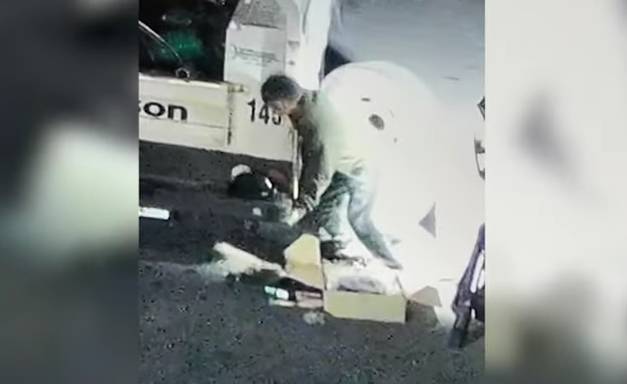 While working on a truck, a teenager in Oakdale, California saved his father’s life by lifting it off of him.

After returning home late on a Monday night, Matthew Wilkinson asked his son to help him fix his work truck, a job they had done many times before Wilkinson told KCRA 3. He couldn’t get a good angle because the rotor was stuck, so he went under the truck to hit it. The truck fell when the rotor came off.

“I know it rolled forward because I saw it roll forward and it fell right on top of me,” Wilkinson said to KCRA 3. “All I could think about was the breath coming out of me. I was just squished. I couldn’t talk. I couldn’t yell.”

When Wilkinson couldn’t figure out how he escaped from the truck, he asked his son, a freshman at Oakdale High School, to see the surveillance footage. According to the footage, his 15-year-old son raised the truck just enough for his father to escape.

“It just dropped right on him,” Wilkinson said. “I was scared. I heard him make a noise like his soul was leaving his body. It was crazy. I just ran over and tried as hard as I could to get it up enough to get him out.”

“My son is my hero. He saved my life,” KCRA 3 quoted Matthew Wilkinson as saying.

In Oakdale, California, Matthew Wilkinson was working on his truck when it fell, pinning him underneath. His 15-year-old son Dalin was nearby and able to lift the truck, freeing his dad. Absolutely incredible! pic.twitter.com/Yp56Tc6cVd