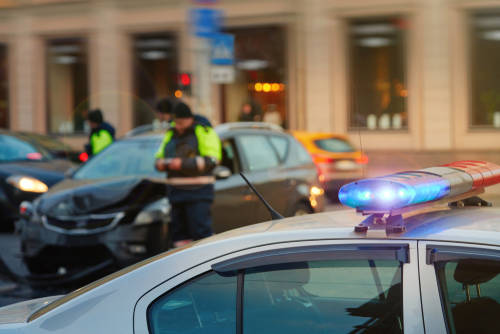 On Thursday, July 7th, just after 9 pm, a Mesa Police Officer had been driving near Morris and University when he noticed a white SUV driving behind him with its hazard lights.

He later received a service call in another area.  As he headed towards the new location, he noticed the same white SUV following him.

Fearing for his safety and not knowing the SUV’s intentions, the officer decided to head back to the Mesa police headquarters.

The video begins with the officer driving to a secured gate at the north end of the Mesa Police Headquarters.  As he approaches the gate, the white SUV is seen right behind him, still flashing its hazard lights.  The SUV drives up to the officer’s car and begins ramming him two or three times until it ultimately pushes his car through the gate.

The officer is heard on the video telling dispatch, “He just hit the back of my car; now he is ramming me.”

As the officer’s car continues to be pushed by the SUV, the officer quickly rolls out of his squad car, smacks the pavement, and then pulls out his gun and begins to fire at the suspect.  During all this, his car continues moving forward until it smashes into a curb.

The officer then finds cover near a forensics van and crosses paths with a crime scene specialist.  The specialist swiftly runs to a safer location.  The officer then caught sight of the woman as she exited the SUV and again fired his weapon.

The woman is seen on the video fleeing her vehicle and running towards the gate.  As she approaches the gate, she collapses to the ground and starts rolling towards the entrance.  She was later apprehended by police officers, taken to a local hospital, and treated for one gunshot wound.

The woman was identified as thirty-nine-year-old Taneysha Shari Carter.  Carter was ultimately charged with Aggravated assault with a dangerous weapon (her car) and third-degree trespass.

Arizona’s Family reported in July that “Court documents said Carter told investigators she believes law enforcement, the military and a group she referred to as the Illuminati are trying to kill her.  She claims she was trying to get the officer’s attention to tell him this information.  Carter also said she thought the officer knew who she was.”