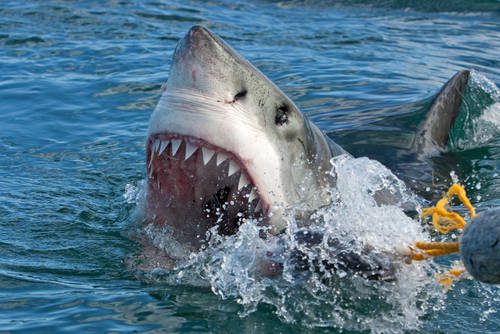 A horrific nightmare unfolded for one woman during a holiday weekend beach trip.  The woman was at the beach early for a morning dip in Plettenberg Bay’s Central Beach when a great white shark attacked her.

According to reports, the woman, 39, was still in shallow waters when the shark swam towards her and viciously attacked her. The unprovoked attack occurred Sunday morning, just before 8 am.

When the shark’s teeth tore into the woman, other swimmers close by could hear her screaming in agony.

The National Sea Rescue Institute was soon called as swimmers and surfers frantically evacuated the water.

An attempt was made to save the woman. A rescue boat was launched, but rescuers were too late. Her body was found about 50 feet from the shore. To prevent people from entering the water, local officials closed the beach.

This shark attack is not an isolated event. There have been three fatal attacks since 2011.

Mayor David Swart of Bitou Municipality told the Mirror, “We have never had a fatality at Plettenberg until 2011, and now we have had three with two in the last three months.

“We are researching into and looking at putting up a shark barrier and increased warning signage and starting our lifeguard’s season a month earlier than usual.”

He added, “There seems to be no change in the shark’s behavior in this area, so it is a bit of a mystery why we have had three fatal attacks in such a short space of time.”

According to reports, the unidentified victim was from Cape Town, South Africa, about 300 miles away. It is believed that she was visiting the beach resort on holiday.