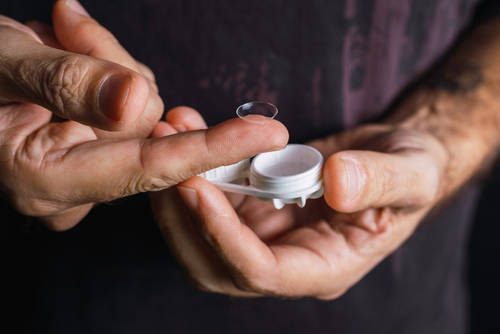 A UK woman wore her contact lenses while she showered, contracting a parasite, and had her eye removed. According to the woman, an amoeba got between her contact lens and cornea, causing an infection in her left eye.

In an interview with the BBC, Marie Mason from Leicestershire told the outlet she began to feel discomfort in her eye in 2015. She had several unsuccessful operations to repair the cornea, but eventually, her vision deteriorated, and she had to have her eye removed.

In March 2020, her eye was removed, and a false eye is now worn in its place.

She believes that the organism entered her eye through tap water and now wants to warn others. She thinks a prominent warning must be put on contact lens packaging to warn users of the threat.

In her words, she shared with BBC, “I started feeling like I had a foreign body in my eye like a bit of sand or grit which, when you rub, it will normally go away, but it wouldn’t.”

Acanthamoeba keratitis, which can be found in tap water, was identified as the cause. According to the CDC, Acanthamoeba keratitis is a rare but severe eye infection that can result in permanent visual impairments or blindness. It is caused by a microscopic, free-living ameba (single-celled living organism) called Acanthamoeba.

“It lives in water and soil, and it is so tiny it managed to get between my contact lens and cornea and started feasting on my cornea, Mason added.

Mason doesn’t think you need to stop wearing contact lenses altogether; you just need to be cautious. She said, “If you want to wear contact lenses, that is fine, but just be very careful how you handle them. she adds, “Water is the man thing you have to be wary of.”

Prof Dart, an honorary professor at University College London at the Institute at Ophthalmology, shared that amoebas live on corneal cells, causing an infection that can last for years and be difficult to treat.

Dart backs Mason’s calls for companies to stress the importance of good hygiene. He said that he wanted to see warnings on the packaging.

He concludes, “These are very simple things to put on the back of a box. It’s not rocket science.”