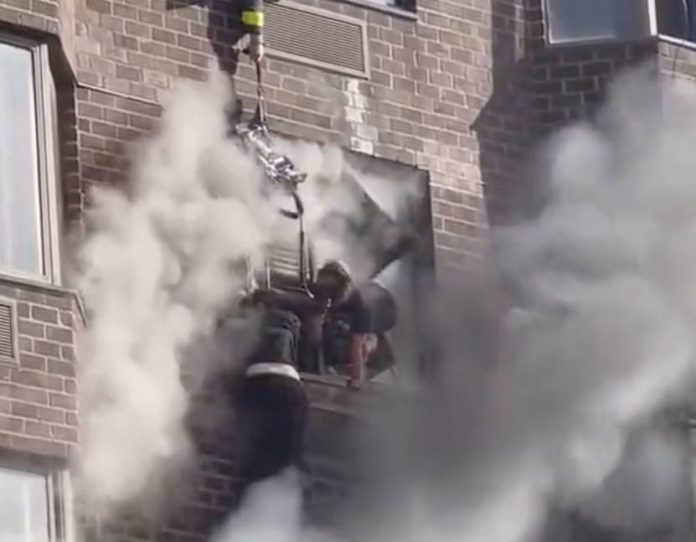 Firefighters in New York responded to a three-alarm fire that broke out around 10:25 a.m. on East 52nd Street. 38 people were injured, including two that are in critical condition, and five that are in serious condtion, according to FDNY.

A dramatic rescue ensued when firefighters used a risky rope rescue to save a woman suspended 20 stories above the ground after the fire broke out in her Manhattan apartment on Saturday.

As shown in the video several firefighters surrounded her as smoke streams out of the apartment window.

Deputy Assistant Chief Frank Leeb said during a news brief, “You saw the life-saving rope rescue. That is a last resort in the FDNY.” The rope rescue was vital to helping the woman but the FDNY explained that it is not common.

Darren Harsch, one of four firefighters involved in the effort said, “This is an extremely rare type of rescue. We don’t do this often.”

The cause of the fire has been determined to be caused by a battery.

FDNY Chief Fire Marshal Daniel Flynn stated, “The cause of this fire is a lithium-ion battery which is meant to power a micro mobility device.

According to FDNY officials, at least five bikes were recovered from the apartment.

Flynn said according to CBS News, “This particular apartment, we believe the occupant was repairing bikes in the building, and the fire was right behind the front door.”

He added, “We want to stress our lithium-ion safety tips.”

Firefighters reasoned to a three-alarm fire that broke out in a high-rise building in Manhattan with Multiple People trapped firefighters Rescued people out from windows leaving 38 people injured pic.twitter.com/uaipZs6yGl