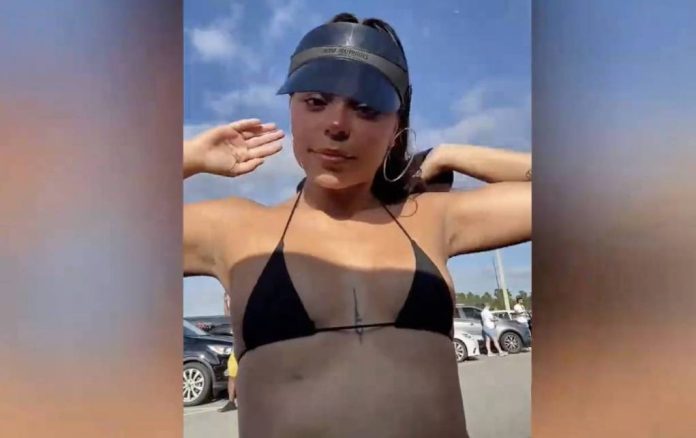 Trying to get a free shirt by breaking Disney World’s dress code backfired, according to one woman.

Helèni, whose TikTok handle is @heleniofficial, posted a video on October 17 showing her in Disney World’s Epcot parking lot. Initially, she wears a tank top tied beneath her chest, but she removes it to reveal a small string bikini.

“Trying the TikTok hack for a free shirt at Disney World Orlando,” she wrote before walking into the park.

Helèni claims that employees tried “forcing” her to buy a Disney T-shirt that covered her bikini. As a result, she donned her tank top again in order to enter the park.

By Friday, her video had been viewed over 6.4 million times. Helèni did not respond immediately when asked for comment.

In spite of what Helèni claims in her video, the TikTok hack was never intended to be a hack.

Amanda DiMeo posted a TikTok in May 2021 in which she claimed to have entered Disney World wearing an underboob-exposing shirt. An employee approached her and gave her a free shirt voucher.

She told reporters she didn’t know she was breaking Disney World’s dress code, which requires shoes, shirts, tops without ties, and “casual, family-oriented” attire. She also said she had worn the same shirt once before at Disney World.

DiMeo, however, told reporters that she was “happy” to get a free shirt, and in her TikTok, she used it to allow others to profit from her mistake. She currently has over 31.2 million views on her video.

According to a TikTok video posted by Alyssa Schueller in June 2021, she experienced almost the same thing at Epcot while wearing a bikini top. More than 6.2 million people have viewed her video.

She had worn the shirt for hours before being approached by Disney employees. Schueller says she was unaware of Disney’s dress code before visiting. Due to the situation, she felt “embarrassed.”

“I was with both of my parents and my older sister, and we were late to our 2:15 p.m. dinner reservation,” she explained. “We had to sit and wait until 4 p.m. to eat, wasting the majority of our day for a romper that showed nothing but a torso and shoulders.”

After more women documented themselves getting free shirts, other parkgoers claimed they were instructed to buy a new top or wear something else they had brought.

Representatives from Disney World did not respond to a request for comment.