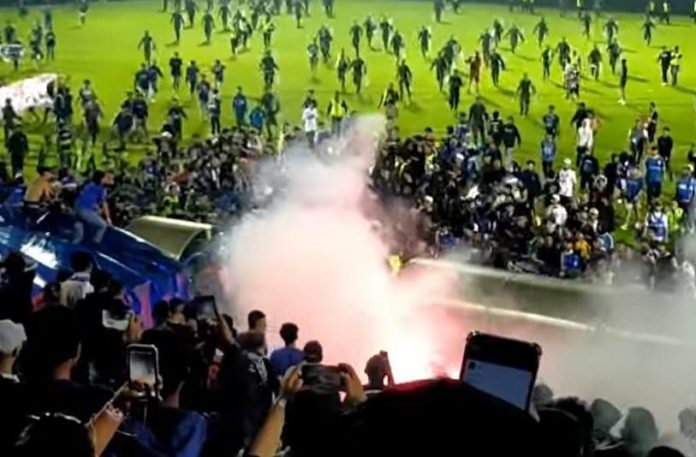 A tragic ending to a sporting event left at least 127 people dead and scores of others injured in a chaotic, violent rampage that broke out at the end of Saturday following an Indonesian Championship football game between the country’s top two clubs.

Arema fans “invaded” the field.  Police fired tear gas, leading to a stampede which resulted in asphyxiation, said the head of the East Java Police, Nico Afinta, at a press conference.

Nico started by saying there was an uprising. He said that as a result of the Saturday incidents, 127 people had died, including two police officers. He added that nearly 200 others were injured, too.

Smoke, apparently tear gas, was later seen on the videos while some people were being carried inside the building. It is not clear how serious their injuries were. Many were admitted to a nearby hospital for “lack of oxygen and difficulty breathing,” officials said.

When Arema FC lost 2-3 against Persebaya Surabaya, Nico reported their fans stormed the pitch to express their anger. Kanjuruhan stadium, located in east Java, seats 42,500 people and is mainly used for football matches.

While officials have not confirmed yet how many people attended Saturday night’s game, videos and photos taken by fans showed full stands. In the past, fans have been violent during matches in Indonesia due to intense rivalries between clubs.

Dex Glenniza, a football analyst, shared with CNN, “All sports clubs (in Indonesia) that compete between the cities are always intense,” He also explained that Arema and Persebaya supporters were “forbidden” to go to each other’s stadiums. Glenniza told CNN that this is done “to avoid friction and clashes between supporters, but there are still many incidents between the supporters, most of which off the field.”

As a result of this fatal tragedy, the Indonesian soccer association has suspended matches for next week and banned Arema FC from hosting games for the rest of this season.

PSIS president, Mochamad Iriawan, expressed his regret over the behavior of the Arema fans in the Kanjuruhan stadium. The incident, he said, had “tarnished the image of Indonesian football,” and he was supporting an official inquiry. He said: “We apologize to the families of the victims, as well as all parties involved in the incident.

“As a result, PSSI has formed an immediate investigative team and left for Malang,” he explained.

The president of Soccer’s International Governing Body (FIFA), Gianni Infantino, described the incident as “a dark day for all involved in football and a tragedy beyond comprehension.”