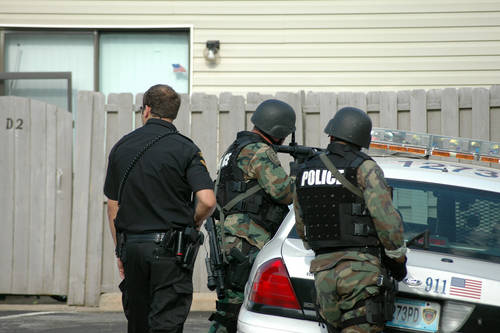 After a long standoff with police, two suspects were taken into custody. The suspects have been identified as Christopher Cook and Christopher Golden, and they appeared in Cobb County Adult Detention Center on Friday.

On Thursday evening, two Cobb County deputies served a warrant for failure to appear by theft or deception at a home west of Marietta in Georgia.

Sheriff Craig Owens, of the Cobb County Seriff’s Office said, “What I can tell you in this moment is this — in plain terms, it is simple, my two deputies were ambushed this evening and killed.” He added, “The two suspects we believe are the perpetrators of this crime are currently in custody and are being held at the Cobb County Police Department for questioning.”

According to the authorities, the two deputies were attempting to serve an arrest warrant and take Cook into custody while they were in the driveway of the residence.

Chief Vanhoozer added during a news conference Friday that “While they were doing that, they were confronted by an individual inside the home with a weapon” According to VanHoozer, the deputies gave “clear verbal commands” to put the weapon down, but he did not comply.
Vanhoozer identified the armed individual as Golden. He said, “At that point, there was an exchange of gunfire between the subject and the deputies. Both deputies were struck by gunfire, and both deputies succumbed to their wounds.”

The two deputies were identified as Cobb County Sheriff’s Office, thirty-eight-year-old Deputy Marshall Samual Ervin, Jr., and forty-two-year-old Deputy Jonathan Randall Koloski. According to Owens, the deputies had been with the Sheriff’s office for more than five years.

“Two wives have lost their amazing husbands,” Owens said, and then he pleaded for prayers. “Pray for us because we need it. Our hearts are broken here in Cobb County.”

After Cobb County Sheriff’s Office reported the deputies had died from the injuries they sustained, SWAT and FAST teams arrived to handle the suspected shooter that barricaded himself, and at about 12:15 am, Cook and Golden were taken into custody.