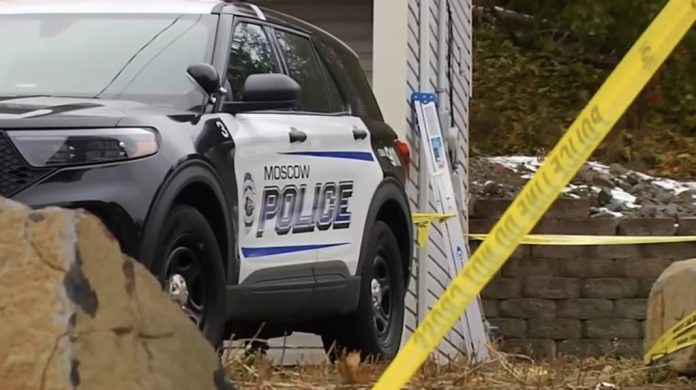 Police revealed Tuesday that the four University of Idaho students found dead over the weekend had been stabbed in an ‘isolated, targeted attack.’

The four victims – Ethan Chapin, 20, Madison Mogen, 21, Xana Kernodle, 20, and Kaylee Goncalves, 21 – were found stabbed with an edged weapon at their off-campus house on Sunday afternoon.

ABC News reports that authorities are attempting to recreate the victims’ activities on Saturday night and early Sunday morning, when they were pictured smiling on a porch.

The police did not find any weapons at the scene and are still searching for the suspect.

Capt. Anthony Dahlinger told the Idaho Statesman that homicide and murder are synonymous at this point.

‘We certainly have a crime here, so we are looking for a suspect.’

According to Mayor Art Bettge, the murders seem to be a one-off.

‘Something had occurred that resulted in these deaths,’ he said, adding that nothing had been stolen.

Previously, he said the students may have been killed in a ‘crime of passion’ or a ‘burglary gone wrong,’ telling FOX News:

‘It’s one of any of a plenitude of possibilities, including burglary gone wrong, robbery gone wrong… any of those is a possibility and not one to the exclusion of others.’

As a result of the lack of information about the cause of the deaths and the fact that police say there is no one in custody, many students left campus early, days before Thanksgiving break.

University of Idaho spokesman Kyle Pfannenstiel emailed the Associated Press Tuesday that the vigil for the slain students has been postponed until after Thanksgiving break.

The autopsies on the bodies are expected to be completed later this week.

The family of Goncalves also issued a statement on social media, saying the 21-year-old was only a few months away from moving across the country.

‘She was looking forward to her job in tech starting on 1/1, a move to Texas, road trips in her just purchased Range Rover, and a trip she planned out to Europe,’ her family wrote. ‘She’d never stop fighting for us and demanding the truth and justice and neither will we.’

According to her Instagram account, with photos of the couple cuddling, Kernodle and Chapin appeared to be dating.

Additionally, Mogen and Kernodle worked together at a local restaurant.

‘Xana and Maddie have been servers here for several years and brought so  much joy to our restaurant and all those they encountered,’ wrote Mad Greek owners on Facebook, adding Mogen ‘was also the face behind our social media pages.’

‘You will be greatly missed. Thank you for being a part of our family/team and for helping me so much over the years. Until we meet again,’ the owner wrote.

On Sunday, police in Idaho responded to a call of an unconscious person at a home.

According to Police Capt. Tyson Berrett of the Idaho Statesman, police found all four victims dead in a house that had been converted into an apartment.

Authorities believe they died between 3 a.m. and 4 a.m.

In a news release, the university also disclosed that all four were students.

The cause of death remains unclear, but police are considering it a homicide.

As of Monday, no suspects have been arrested, but police say there is no threat to the rest of the school community.

Hours before their deaths, the group appeared to be hanging out together.

In one last picture, Mogen, of Coeur d’Alene, Idaho, and Kernodle, of Avondale, Arizona, posed together with other Sigma Chi sisters and Chapin, of Conway, Washington.

Goncalves, of Rathdrum, Idaho, was also in the picture – despite belonging to a different sorority.

At 3.07pm Sunday, the school posted an alert on social media about a nearby homicide being investigated by police.

According to the post, the suspect was unknown at the time, and school officials advised students to shelter in place.

In a second alert at 3.46pm, the school said police did not believe there was an active threat, and the shelter-in-place advisory was lifted.

A follow-up email informed students that all classes on Monday would be canceled ‘out of respect for those fellow Vandals.’

In response to concerns about classmates or coworkers, Green urged people to reach out.

It is understandable that an event of this magnitude would have a significant impact on those left behind,’ he wrote. ‘As Vandals, we must come together and lift each other up.’

The news of their deaths prompted students to express their grief on Chapin’s Instagram page.

‘Too young too soon. Fly high baby! We’ll be there soon,’ Jacob Perez wrote on his most recent post documenting events from his freshman year.

‘Forever grateful to have you in my life,’ another wrote.

She was also described by her family as a ‘defender’ and a ‘protector.’

‘One of the most painful experiences has to be to sum up an entire person in a paragraph,’ the family wrote. ‘Our sister can’t be packaged up in a box with a neat bow and shame on anyone who would expect that.

‘Kaylee was, is, and always will be our defender & protector. She is tough & fair. The ultimate middle child. She did absolutely everything she set her mind to. She didn’t hold back on love, fights, or life. Kaylee was the ultimate go getter and constantly wanted an adventure.’