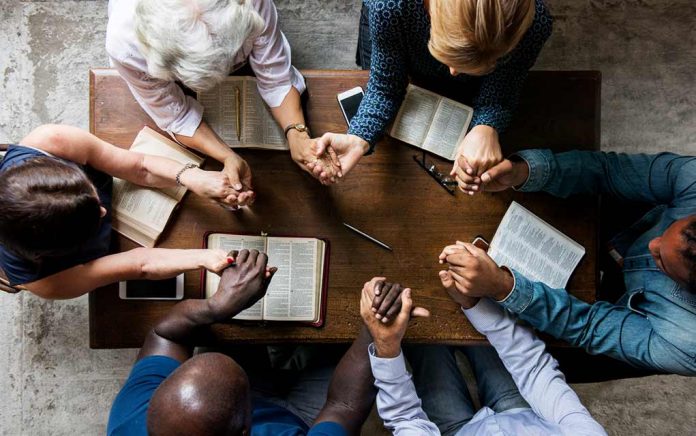 (TheDailyHorn.com) – Christianity is a faith rooted both in the Old Testament and New Testament of the Bible with a skew more towards the latter because it does, after all, center around the life and death of Jesus. However, with the rise in Progressive Liberalism in America, it is coming under attack more and more often from the left-leaning politicians, their constituency, and the mainstream media.

The problem arises because many of the doctrines found in the Bible are in direct opposition to the belief system espoused by the Left. Jesus, the apostle Paul and the rest of the authors in the New Testament left us a fairly good roadmap of what is considered acceptable behavior for Christians.

Life choices like homosexuality, abortion, and premarital sex are among those acts that are… shall we say, less than encouraged? However, those “liberties” and others tend to be the building blocks of the Liberal/Democratic Agenda. And yet, some in the media would have you believe that the fault lies with those who want to obey Biblical principles and not with those whose goal it is to change them.

When President Donald Trump nominated Brian Buescher to sit on the federal bench, fierce criticism was launched his way during his confirmation hearing in front of the Senate Judiciary Committee. One might expect that august panel to scrutinize Mr. Buescher’s views on things like the law, but that wasn’t what was on the mind of at least two of the Democrats.

Senators Kamala Harris (D-CA) and Mazie Hirono (D-HI) took exception with his position, not on legal matters but rather with the one he held within the Knights of Columbus, a Catholic charitable organization. Their comments seem to indicate that they felt he could not remain neutral to a case involving the LGBTQ community making the assumption that the commitment to his faith would cloud his judgment. Perhaps they just figured that since most of the liberal judges, especially in the Ninth Circuit, engage in judicial activism that he would also lack integrity.

I appreciate that Democratic Rep @TulsiGabbard went against her party to defend religious freedom. @POTUS @realDonaldTrump’s judicial nominee Brian Buescher was criticized by Dems for his affiliation w/ the Knights of Columbus & his Catholic beliefs. 1/2 https://t.co/4eveL3E3HS

Also known as “de-platforming” it really is a self-explanatory word: that is to deny Christians and Conservatives a place to express their views. It happens online, in the pre-K-12 public schools, and on college campuses across the nation, where sometimes it’s accomplished through the threat of or the actual use of violence.

The “snowflake” mentality of the younger Liberals has caused them to demand “safe spaces” wherever they may be. For some reason, they seem unable to deal with points of view that run counter to the education indoctrination they received as children. Simply speaking the words that are printed on the pages of the Bible send them into a tizzy, telling anybody and everybody just how “unsafe” it makes them feel.

Being an outspoken Christian is becoming more difficult in America by the day. Perhaps it’s just unfamiliarity, but Islam and the Koran, which also denounce many of the same lifestyles as the Bible, don’t seem to draw the same condemnation from the Progressive Liberals. In fact, there is a plethora of information on how to accommodate followers of these religions. Or maybe it’s that the leadership of the Democratic Party does what it does best — use fear-mongering to increase and control their voter base.