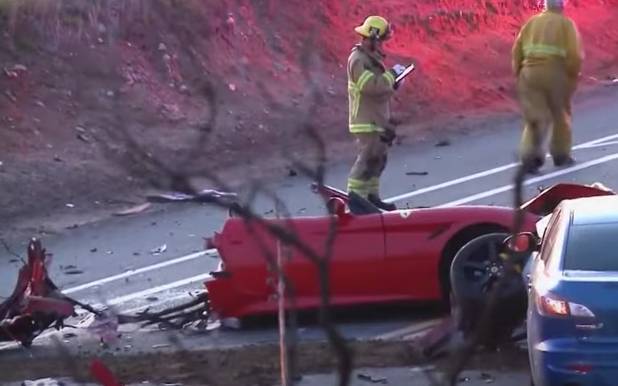 One person was killed in a three-car crash in southern California on Friday afternoon, and a Ferrari was split in half.

In a statement to Fox News on Saturday, the Orange County Fire Authority said the call was received at 3:42 p.m. Pacific Time.

Three adults were treated upon arrival, including one who was airlifted.

The Ferrari driver was pronounced dead at the scene, according to KTLA.

Anselmo Templado, Public Information Officer of the California Highway Patrol, confirmed to Fox News Digital that Robert Nicoletti, the Ferrari’s driver, died after being ejected from the vehicle.

According to Fox 11, investigators believe speed played a role in the accident, which occurred on Santiago Canyon Road east of Limestone Canyon Regional Park in the Silverado area.

As a result of Nicoletti’s speed, Templado explained that he was unable to navigate the curvature in the road. There is no evidence that alcohol played a role in this accident.

According to the California Highway Patrol, a Mazda SUV, a Toyota and a Ferrari were all involved in the crash.

It is understood that the drivers of the other two vehicles suffered only minor injuries, according to Templado.

It is reported that Santiago Canyon Road was closed for about four hours between 4:12 p.m. and 8:02 p.m. Pacific Time.