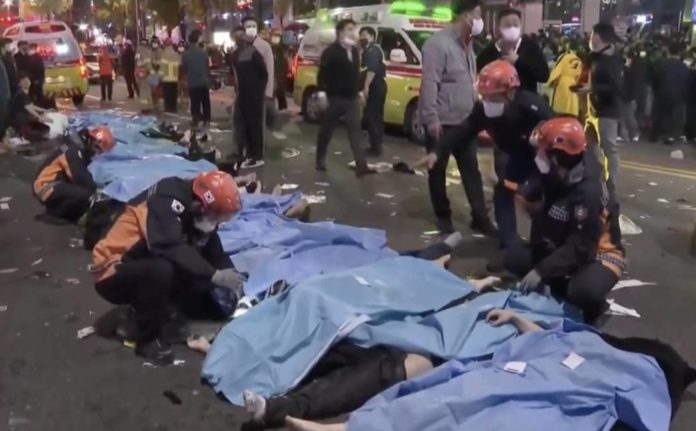 In the first outdoor, mask-free Halloween celebration since the 2020 pandemic, local media reported 146 people were killed and 150 others injured in a stampede during Halloween festivities in Seoul’s Itaewon district.

Approximately 100,000 revelers were out celebrating in the popular nightlife area, according to Yonhap News.

There were videos posted online showing people in fancy costumes being pushed through narrow streets. There were some who tried to escape the deadly crush by climbing walls on either side.

There were pictures showing people receiving first aid and being taken to ambulances near Itaewon’s Hamilton hotel.

Emergency text messages were sent by government officials to residents in the affected area urging them to return home. There were more than 400 emergency workers and 140 vehicles on the scene.

In the elbow-to-elbow crowd, some celebrants were completely trapped.  As a result of the loud noise, many people were unable to call for assistance, according to reports.

Yoon Suk-yeol, the president of South Korea, has called an emergency meeting, according to the BBC.

A number of people posted on social media earlier in the evening that the Itaewon area was too crowded and unsafe.

Despite dozens of dead bodies on the streets, Seoul’s Yongsan fire chief Choi Seong-beom told reporters only 13 bodies had been sent to hospitals.

“The area is still chaotic, so we are still trying to determine how many people were injured,” Moon Hyun-joo, spokesperson for the National Fire Agency, said.

There were at least some foreign victims, according to reports.

An emergency meeting was held with senior aides by President Yon Suk-yeol, and emergency medical teams were dispatched to the site, according to his office.

Attempts are being made to determine what caused the stampede, according to authorities.