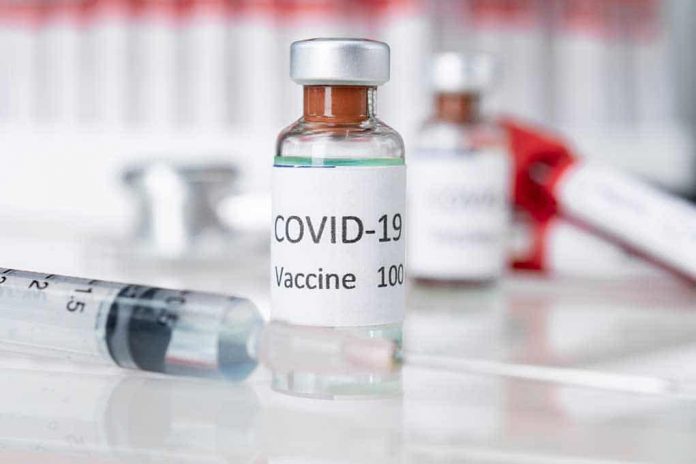 (TheDailyHorn.com) – The United Kingdom consistently said that vaccinations would not become mandatory ever since the beginning of the pandemic. However, the union’s Health Secretary, Matt Hancock, told media outlets this week that healthcare workers could be required to get an inoculation if they want to work in care facilities with vulnerable patients.

Approximately 1.5 million people work in the field in Britain. According to the government, less than half opted to receive the vaccination, but a vaccination rate of 80% would be necessary for assisted living facilities to be considered safe.

This had led some to wonder whether mandatory vaccinations might be introduced in the United States. Mandatory COVID-19 vaccinations are being recommended for law enforcement in at least one state. More could come soon.

While it’s not currently required in the state, Massachusetts Attorney General Maura Healey believes vaccinations should be mandatory for law enforcement operatives. In an interview on Monday, March 22, Healey said prison correctional officers and state police should be required to get a vaccination. Should an officer prefer to forgo inoculation, she suggested they should consider finding a new line of work.

However, Healey went out of her way to stress that she was not speaking from a legal perspective. She was simply answering a question and stating her personal belief. She does believe it’s “irresponsible” for public workers to take a paycheck from taxpayers and not wear a mask or get a vaccination.

In 1902, in Cambridge, MA, a smallpox pandemic broke out. The city created an ordinance that required all adult citizens to be vaccinated or pay a fine of $5. One person sued on the basis that the mandatory vaccination violated his Fourteenth Amendment right to liberty.

That case made it all the way to the US Supreme Court. In a 1905 landmark case, the Court ruled in Jacobson v. Massachusetts that the states have the authority to protect public health, safety, and the common good. According to that ruling, that authority included mandating a vaccine. The court added that, at times, the state might set aside individual interests to protect everyone’s health.

So, while it appears the federal government does not have the power to enact a nationwide vaccination mandate under the US Constitution, the states do have this authority.