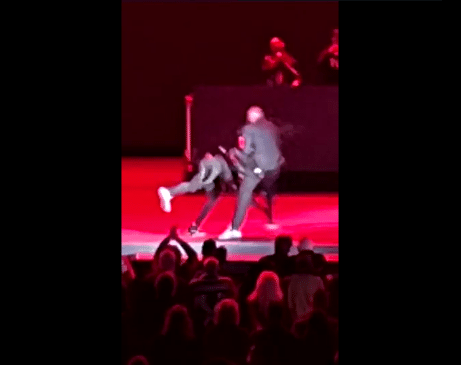 A 23-year-old man attacked comedian Dave Chappelle onstage at Los Angeles’ Hollywood Bowl arena, pointing a replica handgun that contained a knife blade at the comic. The s replica gun is a type that could eject a real knife blade when discharged correctly.

This man attacked Chappelle as he was about to leave the stage during the Netflix Is A Joke Festival. Security guards pulled him off Chappelle and detained him. The suspect was arrested and accused of assault with a deadly weapon.

Just came out of the Hollywood Bowl where a man charged and tackled Dave Chapelle on stage and got his ass kicked by at least 10 people.

LAPD and LAFD are now loading him into an ambulance pic.twitter.com/7SXPe9e8az

Netflix condemned the attack on Chappelle and said the comedian’s performances at the Hollywood Bowl were epic and record-breaking.

The incident at the show appeared to have left some audience members in shock, but Chappelle returned to the stage after being applauded by fans. He also referred to how he has had to ramp up his security after facing widespread backlash for his jokes about the transgender community.

To read more news on this topic: