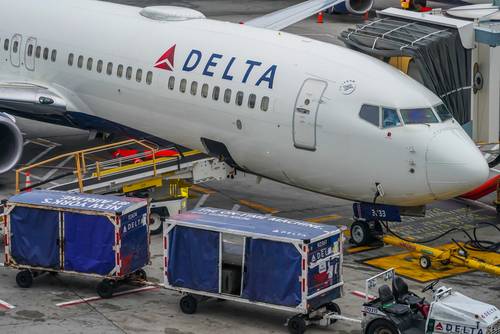 Cory Lee was looking forward to deplaning after the long flight when his Delta flight from Santiago, Chile, landed in Atlanta, Georgia, on Nov. 13.

As an award-winning travel blogger based in Georgia, he was diagnosed with spinal muscular atrophy at the age of two.

It hasn’t stopped him from traveling the world. Lee says he always deboards the plane last, waiting for his chair at the jet bridge to arrive before deboarding.

“It weighs like 400 pounds, so it usually takes a while,” Lee explained.

According to Lee, when the flight crew approached him with the aisle chair that transports wheelchair users to their own wheelchairs, he inquired whether his power chair was at the jet bridge yet.

When Lee found out that his wheelchair was not on the jet bridge, he told the flight attendants that he preferred to stay on the plane until it was available.

Lee’s request is covered by the Air Carrier Access Act.

According to the U.S. Department of Transportation website, “You can request that your wheelchair or walker be returned to you on the jet way at your destination airport and not the baggage claim area. Airlines are required to return wheelchairs to users as closely as possible to the door of the aircraft if requested.”

His chair can take up to an hour to reach the jet bridge, and the aisle chair is uncomfortable.

“Plus it puts me at risk for developing pressure sores,” he added.

The flight attendants were angered by Lee’s request to wait for his wheelchair to be brought to the aircraft.

Lee says a supervisor got involved, who also wanted him to deplane before his wheelchair was delivered.

During the interaction, captured on video and shared on Instagram, a flight attendant told Lee to exit the plane and wait for his wheelchair in the aisle chair, or the TSA would make him “get off the aircraft with all their guns and stuff.”

Lee said at that point that he “did not want to cave to pressure. I know the law.”

Lee claims to be the first wheelchair user to visit every continent.

Soon thereafter, a “very nice and helpful” Atlanta airport employee arrived and told Lee the wheelchair was at the jet bridge door.

“He picked me up and [put me] into the aisle chair and then again into my wheelchair,” Lee said, adding that he was in his own wheelchair about seven to eight minutes after the flight attendant’s gun comment.

We reached out to Delta and received a statement from them.

“The exchange in this video does not reflect the high standard of care Delta people aspire to every day,” Delta said in a statement. “We are reviewing what occurred here and will follow up as appropriate with our people. Delta has reached out to this customer directly to hear more about what they experienced and to offer further apologies.”

Lee said he emailed the airline and received a response saying they were investigating the issue.

However, he wants to speak with flight attendants and Delta corporate and ground crews about how to interact with people with disabilities.

“They need accessibility training and to hear from actual people with disabilities like myself,” Lee stated. “They need to understand the impact their words have.”

When Cory Lee was 15, he took his first trip abroad to the Bahamas.

“Seeing the culture and trying the new foods sparked something inside of me that made me want to see so much more of this big, wild, beautiful world of ours,” according to his blog.

According to his blog, he graduated from the University of West Georgia with a degree in marketing.